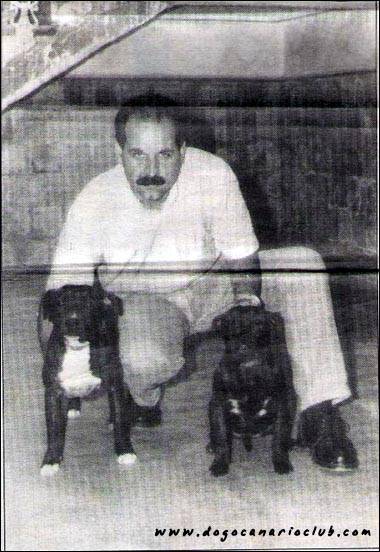 16 August 20153 February 2020 Ewa Ziemska
When the dog, the best friend of the man, becomes passion, study and improvement of canine breeds, character and functionality, then it is not anymore only pure liking, is authentic cynophilia. And that passion for the dog is the one that has Manuel Moreno Miranda, pioneer in Gran Canaria of the canine exhibitions, and the recovery of the breed Presa Canario. Passion the he has since he was a child, as his most loved Christmas present was a dog.

Since he was 7 years old he already had Presa dogs, whose names are kept in his memory, repeating them with some melancholy: the Negrito, the Capulino or Domingo (presa dog that appears in the above picture and that was taken as reference because of his characteristics in the recovery of the breed). In the Seventies in the north of the Island a group of dog enthusiasts, began to question themselves about the future of the Presa Canario, as they realized that without taking any action the breed could disappear. Because of this situation, they organized the first exhibition of the Presa Canario in the north (of the island), more precisely in San Isidro, and that was a full success, and was the first decisive step in Gran Canario for the recovery of the breed, that will lead to a great “boom” of the breed in the Eigthies, and that is still going on.
The recovery of the breed started with the few specimens that were left, as Manuel Moreno claims; many crosses were made, and they are still being done, and for this it is possible to see Presa dogs, sons of Presas as mother and Neapolitan Mastiff as father; or Bull Mastiff, Dogue de Bordeaux o Great Dane. This is due to the fact that every breeder acts on his own, searching for more temperament on the dog. In canine terms, as Manuel Moreno points out, breeders are more interested in the genotype than in fenotype, it means that the visual aspect of the dog is less taken into account, even if Manuel Moreno states that he looks for fenotype but taking care the dogs do not loose their temperament.
Manuel Moreno Miranda has a nice collection of old photos of Presa Canario, and also an important library as far as the dog is concerned, and because of this he provides us with a very generous information about the Perro de Presa Canario, and about the criteria that were taken into account when they had to set up the breed standard.

In the origin of the works of recovery there was no agreement between the two clubs that had been created, one in Tenerife and another one in Gran Canaria, which caused important disputes in the recognition of thebreed. In Tenerife, in 1982, a group of breeders decided to start team working, forming an association with the purpose of taking ahead the already started recovery of the Presa Canario, by realizing a breeding policy based on a selection program focused on a breed standard that took account of the historical data, of the oral informations passed on by ancient breeders and of the more representative Presa population of those years. It is interesting to point out that in Gran Canaria, and more precisely in the northern part of the island, Manuel Moreno, along with a group of friends, already had started to do the same since the first half of the Seventies, even if anonymously.

The definitive step occurs in Tenerife, where the regional exhibition of the Presa Canario is celebrated, in October 1986. The following year, and with the purpose of studying a greater number of the existing population of Presas, the Spanish Presa Canario Club organized June the sixth, 1987, the Second Regional Exhibition in Guía, event in which Manuel Moreno did not play an outstanding role in its organization. During the show were filled in 80 reports of the dogs that were there, coming from the municipalities of Gáldar, Guía, Arucas and Firgas. Celebrated the two first regional events and with the purpose of studying the existing population by the Commission of Spanish Breeds, it was solicited the presence in Madrid of two dogs, one of each province, to be presented officially in the Autumn International Exhibition of 1987, with the intention of elaborating a breed standard. The Commission of Spanish Breeds gathered together enough information and the 24th January 1989, the official standard of the breed was approved, establishing the physical and psychic characteristics of the Presa Canario.

The general characteristics are summarized in the following description: a medium-sized dog; with a straight profile; a massive head, rather square, and a wide cranium. Perfectly plumbed extremities, of wide and strong bones. Powerful and muscular hindquarters. Elastic and heavy skin. Short hair with no undercoat, slightly rough. Black, brindle or fawn coat, with black mask.

His aspect denotes power, severe glance. Specially suited for the function of guard and defense and traditionally for the control of the cattle.

Lack of unanimity
At that time, as Manuel Moreno states, the exhibition celebrated in Guía in 1987, got the provlem of lack of unanimity between the clubs of Tenerife and Las Palmas, which caused a series of concerns, but according to him the only competent authority was the Real Federation for the Promotion of Spanish Canine Breeds, and he thinks the time has given him the reason, since those that earlier refused to recognize the standard that was elaborated in Tenerife and in Guía, are, at present time, judging dogs following the same standard, that is moreover recognized by the Canine Federation.