There are several vital components/ variables that must be present in a litter you will be looking at for PP prospects. If they all are not present, the litter is not worth the investment you are preparing to make. Criteria for the successful end-result of a search for a personal protection prospect must be fulfilled when it comes to three most vital components: The Breeding, The Breeder and The Trainer.

Do NOT go out looking for a PP prospect in litters where breeders cannot present you with proof that parents have all of the abilities you want your future dog to display. To produce PP dogs sire and dam must be tested in protection and show definite ability. It only makes sense: if you want a dog to have courage to protect you, with a balance of drives, strength of nerve and confidence that will allow him to be a pleasant and trustworthy companion with a on and off switch, these qualities MUST be evident throughout tests that breeders MUST conduct to determine breeding suitability of both parents. In the absence of testing there is no telling of what goes into the dog genetically, and a professional breeder will not leave these important qualities unchecked.

I liked what Jerry Bradshaw had to say during his latest PSA seminar: “Genetics is 80 per cent of the dog. The day someone’s mule wins the Triple Crown at the Kentucky Derby I will stop believing in genetics.”

Temperament (nerves, drives, thresholds) is 100% genetics, and it is genetics that will set the boundaries to your dog’s future working ability and behavior. The more consistency in proven working ability there exist within each generation in dog’s pedigree, the higher is the validity of expectations that the pup showing good promise will turn out to ones satisfaction.

Especially in Molosser breeds, with problems like sharpness and lack of confidence so widely spread, it is a waste of time and money.

Looking at the dogs in these puppy’s lines will give us an idea of what the parents reproduce like, how they themselves fare against their offspring and stiff competition.

Most articles on the topic aren’t definitive enough, because they are not given an illustration. As performance breeders and professional trainers specializing in personal protection we realize that most people who would turn to this article for help and instruction won’t have the same understanding of the meaning – that is why we put this article together.

Why do we call this litter a performance litter, because of dogs in the lines are all PROVEN personal protection dogs. Proven outside their territory on strange decoys, while competing in reputable events under well-respected judges.

Litter’s Dam – Vega is a product of Cona x Duna breeding from two years ago. The litter of 9 yielded 8 dogs that came back for pp, ob, and agility at Red Star. 7 of them, including Vega, were titled, received awards and titles by the time they were 20 month old surpassing their parents in performance when competing against them.

Through her Dam, Duna (IAPC BST I, OFA “Good”, GDT, IDT3, Hardest Hitting 1st, DSO contender), Vega represents the line of the legendary Nala: an outstanding female that both Alex and Stefan Baumgartner tested in CI and were extremely impressed with. Nala was calm, supremely confident and hard on a man, even-tempered and without undesirable levels of sharpness, high levels of suspicion, yet trustworthy with kids, neutral and friendly strangers, with the on and off switch we all admire in our dogs. Through Duna and her brother, Red Star Batur, Nala is probably the most influential Presa in the modern performance Presa strain. All of us in working Presa the community know about Presas like Duna and Batur, and their hard-to-match contribution to performance Presa world in a form of their phenomenal offspring – especially in cases of Oakleaf’s Red Star Tianna (Batur x Cheetah) – a Presa with the most working titles and achievements in the world today (PSA1, IAPC BST II, WABA OB1, IWPA WD1, ARBA Master Supreme Grand CH, IABCA Multi CH, IDT3, GDT, TDI, ATTS, CGC and TAN, Confirmed “Very Good” and OFA Excellent); the much admired in serious working circles Red Star Millennium Primo, ranked WABA IronDog, PSA I and OFA Excellent (Duna x Turco), Red Star Ivy , Lacota the entire Cona/Duna litter already mentioned above, as well as the most recent Duna x Canario pups, Zeeta and Jetta.

While this is Vega’s first litter, she has produced it with a proven stud; Canario, in an IAPC endorsed breeding. His is only his fourth litter, but the results we have seen are outstanding so far. Red Star Zeeta and Jetta (out of Duna) began to display phenomenal drives, confidence and competition potential since 6 months old. And RS Jetta is right now in training for the Spring PSA trial.

Canario’s litter with RS-bred Cheetah (Turco x Bengal) produced several extremely dominant, driven males, one of which today is a seminar demo dog for the renowned trainer John Brown of New York, receiving most enthusiastic praise to his protection abilities.

To summarize, based on dogs in these pups’ lines: sire and dam, grand and grand-granddam and grandshire , littermates AND after extensive preliminary testing (the pups are 7 weeks old tomorrow, and ready to go to their new homes in a week’s time) we honestly expect good results from this litter.

From day one of testing all of them did not disappoint us! Observe the consistency and behavioral uniformity – we were VERY pleased with them. In our opinion and according to all the tests we have conducted so far, this is a very high quality performance bred litter.

If one breed’s enough, anyone can get lucky and produce a capable dog once in a great while. Many amateurs would consider it a great accomplishment. In our opinion, such results can not justify a “working” prefix to a breeding program. Majority of working dogs, their high quality WITHIN each litter, is what makes a program worthy of a title “working dog breeding”. These puppies are no coincidence – based on the quality of dogs that went into their genetic makeup (see above) they are a result of a professional approach to breeding working dogs. The following are the clips of each of the 12 pups from the Vega x Canario litter, being tested on a rag in three modes of environmental stress outside of their familiar territory- with a rattle stick around and over the head, bottle filled with coins abover and over the head, and on a plastic tarp with a large empty plastic jug.

At this age, any performance dog breeder of Mals, GSD’s, AB’s, Dobes etc. would be very proud of such results, individually and overall.

Any expert would confirm that puppies that can go through such a test with same results at this age would be considered good prospects for anyone with working/training/competition expectations.

Expect nothing less from a pup with a true PP potential that won’t be a waste of time, money and energy. The Buyer’s biggest job at this point is to communicate to The Breeder their needs properly, so their future prospect is expertly chosen.

The Breeder is to be trusted to pick the best PP candidate to fit your situation ONLY IF The Breeder is QUALIFIED. That means the breeder is an expert when it comes to PP or works closely with an expert. You wouldn’t turn to an AKC show Husky breeder or a newspaper ad for a racing sled team candidate, and it shouldn’t be any different when it comes to a dog you will trust with yours and your family’s safety. In a nutshell, one who is breeding working dogs cannot do it if he doesn’t have any idea what a working dog is.

To determine each puppy’s suitability as a PP candidate, testing should specifically include the following components:

1. High tolerance to Environmental stress of all kinds is CRITICAL in a PP dog – early testing can be conducted by observing each puppy’s initial reaction to various stimuli and its recovery time. Puppies must be exposed to various objects outside their territory on several different surfaces, pup has to confidently overcome strange noises (rattling stick, plastic can filled with rocks), they must curiously investigate, never run away or show fear. Why ability to function under stress is of such critical importance? If Presas are to protect, they must do so not just by growling or biting a sleeve, which isn’t functional – but by actively engaging an aggressor under pressure, as the very minimum. But if the dog cannot protect outside of its territory (home and yard) under distractions of various difficulty, what good is it, then? Trials, competitions and other forms of field testing prove that, especially in Molossers, environmental stress is the biggest obstacle in the way of successful pp dog training and performance. Testing tolerance is essential.

2. A worthy testing scheme will evaluate the amount of drive each puppy has. Main drive to judge at this early age is prey drive, For this we use a tug toy a burlap sack, play with each pup individually to see how interested they are in chasing and catching, how willing to hold on, especially hold under environmental stress and distractions (rattle sticks, shaking cans with rocks, squishing plastic cups). After that, we observe each puppy’s willingness to fight over the captured prey while on the bite (shaking and growling, holding on), behaviors that reveal the beginnings of fighting drive in Presas.

3. Sociability, desire to please, desire to comply. We observe each pup’s behavior with us. How quickly puppies learn to know and recognize us, how willing are they to come over and be petted, how attentive and responsive to attention they are (looking in the face, sitting down and looking up, climbing into the lap, etc.)A pup that is independent and cares little or not at all for human touch, won’t pay much attention to its owners in the future, and might very well be unwilling to comply in training, which will very much impair his use as a PP dog. High dominance and independence in a pup make for a big disadvantage to the future owner – they usually spell non-compliance and non-cooperation. So many of the so-called “dogmen” praise a puppy who has a lot of fight in him, who is cocky and very or even overly dominant, i.e. a dog that doesn’t accept anybody as authority. These people have no idea about the art of training and raising highly capable protection dogs. Make sure that a person who makes a selection of your puppy is competent when it comes to functionality in many more ways then just words: if opinion can not be backed up with SOLID PROOF. Accept no substitutes.
To see protection abilities of the many representatives of the same lines, please visit “The Video” and “Performance Presas” pages for video and pictures.. 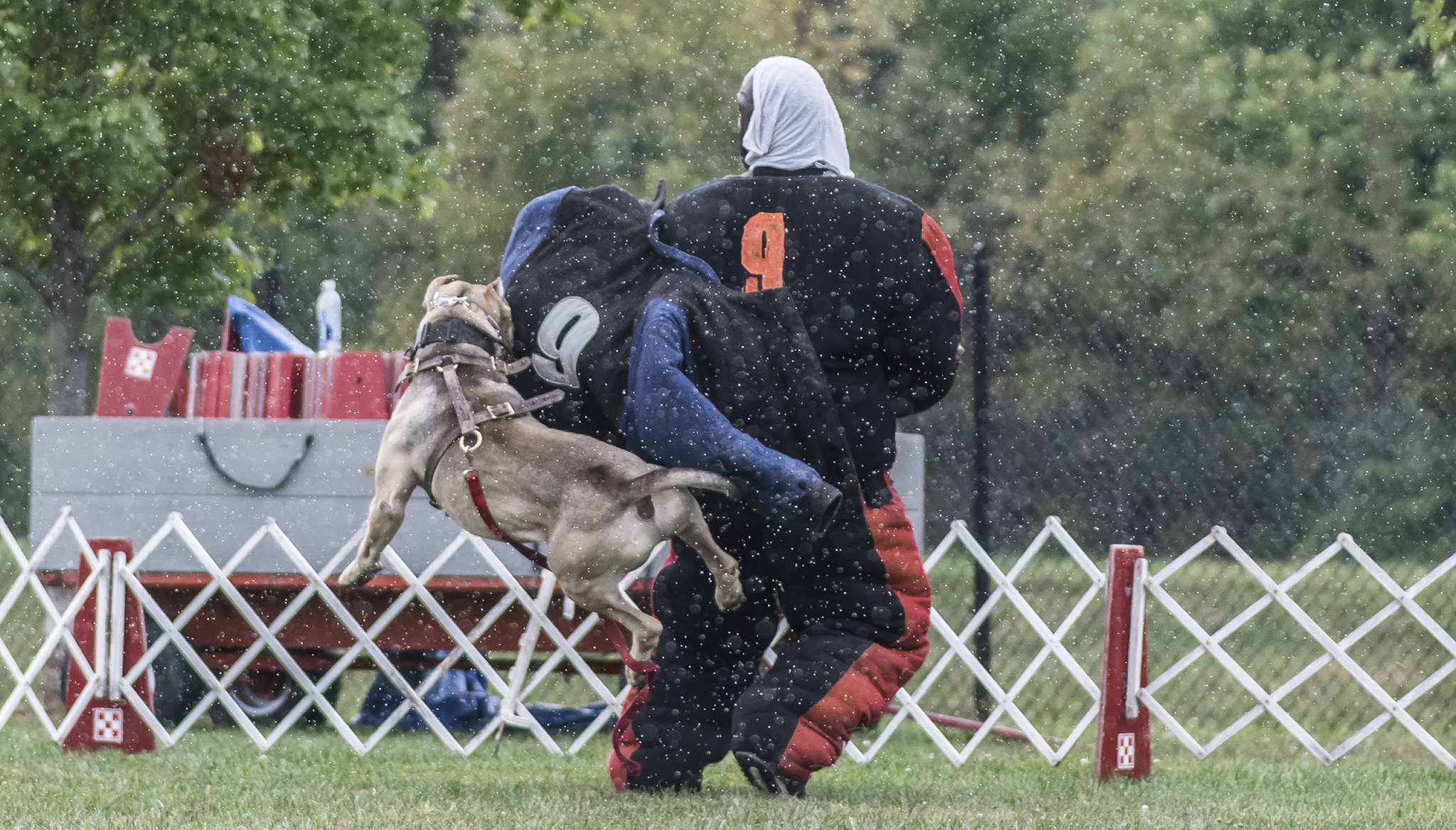 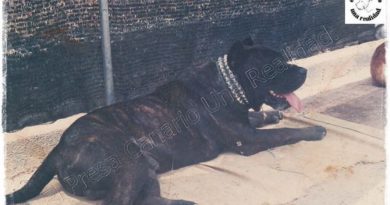 On selection of functional Presa in USA – George “Joby” Becker 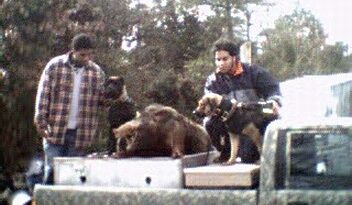