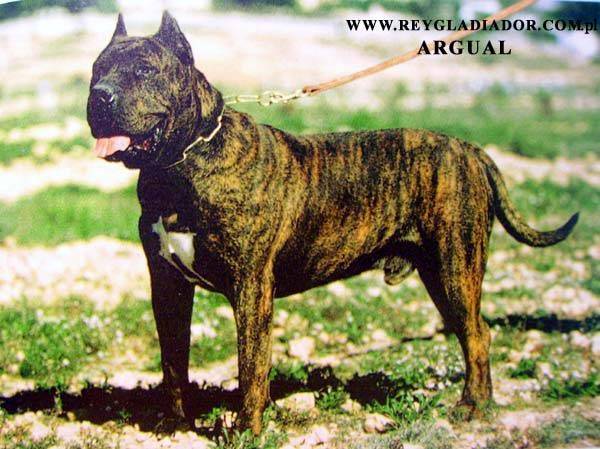 The Presa Canario is an animal of medium type. He has a rustic and robust appearance and is mesomophoric, in a rectangular shape that provides him great flexibility. Endowed with good musculature, conferring the power of a guard dog, their limbs have good forequarters separated from each other giving necessary stability.

He should have a good front, with cylindrical ribs. The breastbone should descend to the height of the elbow. The medium size should be 61-66 centimeters in the males and 57-62 in the females. The front limbs should be thick and separate, never hitting the body. The hind should have good muscular development, long legs with low hocks, a wide croup and a very high implantation of the tail, which should be thick in the origin and at rest comes to the height of the hock. His dorsolumbar line is ascending to the croup.

The head is solid, of square aspect, wide cranium and proportionate. The cranium convex with the nasofrontal depression not very abrupt , depression between the frontal sinuses very pronounced, wrinkles with certain symmetry and mastoid and temporal muscles should be proportional and not stand out. The face or muzzle represents 40% of the total of the head with medium thick and fleshy lips covering the superior to the inferior [jaws] with certain flaccidity.

The teeth are well assembled, with a base of very strong implantation and bite in scissors or inverted scissors. The tongue should present well marked grooves and be of rosy tone. The eyes should be slightly oval, almond-shaped, big, very separate, with tight lids and pigmentation in the most dark black possible. The conjunctiva should not be visible. The ears are of small size, of high implantation and preferably clipped they should remain erect and of triangular form. The neck, short and with the loose skin forming a slight jowl, is cylindrical, straight, solid, muscular.

The hair, of rustic appearance, generally short in all over but is denser at the throat, neck and crest of the buttocks. The most desirable color is the striped in all their ranges,to bardino, as well as the tawny. Accepted is the presence of white marks on the neck, chest, hands and feet. The black color is accepted, although it’s not very frequent*.

*note- this article was written prior to the FCI recognition of the breed. The black coat is unacceptable as of June 2001