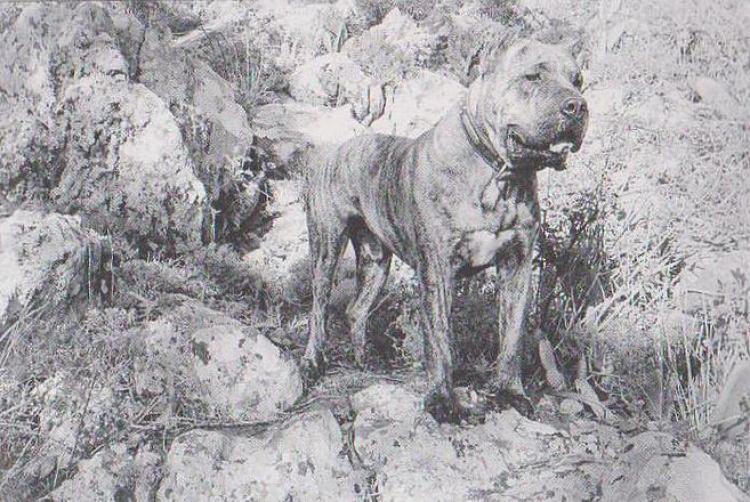 The racial model of the Presa Canario condenses, on the whole, the essential characteristics of their morphology and is translates to text and definition, the ideas of numerous breeders who don’t only think of the dog of the past, but rather in the dog of today and of the future. The racial model mood is modifying gradually, but at this time is defining the structure and character of an animal of guard, the perfect image of the guardian dog par excellence, that is a medium animal, rectangular, strong, of wide base and broad front and with magnified pectoral development.

Their head, solid, harmonious, without big relief, wide muzzle, with a set of teeth of strong implantation and a powerful chewing mechanism that permits long and firm holds. Their croup is slightly higher than the withers which acts as a firm axis for traction in evolutions on the ground.

Their neck is strong, short, of great perimeter, strong musculature and with loose skin. It is the lever that immobilizes the action of capturing.

Is the image offered clear, because are they the definitions that establishes the racial model. However, is it possible that are there so many lovers of this dog that they are not able to see what is a Presa?

And I don’t think this blindness affects only a high number of fans, but rather were multiple exhibitions where judged was elegant movement, perfect premolars or a brilliant coat, without realizing that in front of them they didn’t have a “Presa,” but simply an animal “Presa type”, that is to say they had forgotten the essential.

The typical or breed expression should dictate above everything, as first requirement and primordial courage, even above the function, because an animal of doubtful breed purity properly educated and with good aptitude could give results much like a “purebred.” Of course we also want the Presa Canario to have good movement, complete and perfect premolars and a rustic well pigmented coat, but without forgetting that the dog is really a Presa above everything. We could accept inclusive defects but having no doubt about the breed to which he belongs.

How many times were a specimen in the rings of competition which could be considered “a good canine specimen” good build, lively, correctly pigmented, “but without typical to a scarce expression” which faults their qualification, with resulting anger and incomprehension of their owner and others who consider that the Presa Canario is a dog of good size and temperament, muscular and with a brindle or tawny coat.

It doesn’t matter which this half-breed is [crossed to] with Bullmastiff, Neapolitan Mastiff, Bull Terrier or Great Dane, disregarding the essential, “the typical,” as an unquestionable sign of identity and of unmistakable individuality. The causes of atypical reside mainly in the head, because atypical bodies are less frequent.

In the head, spheroid effects from very arched craniums, narrow muzzles which accentuate the triangular appearance of the head and establish a great difference between the cranium and the face of the animal, very short muzzles “caricature” indication of prognathism, implantation of the ears too high or visible conjunctivas are all evident signs of cross breeding.

As for the body, lack of proportion between the front and the back, that is to say very wide chests and very narrow hips, graceful appearance, with inferior line withdrawn, square appearance that confers a tall animal, limbs too long or fallen croups that magnify the longitude of the tail.

There are occasions in which too cylindrical bodies provide a massive appearance, which quarrels with a functional and quick dog. Nevertheless it is necessary for fate of the breed, the most important events of our country are judged by specialists who value above all “the racial expression,” although we have to fight against the atypical of these “parallel presas,” whose influence in the breed is fateful.

Judges as much as breeders should be zealous vigilantes of the typical essential quality. Above all we are supposed to keep in mind that the material that we breed or that we judge is, without discussion the Presa. The consolidation of the breed and its future depends on this aptitude.