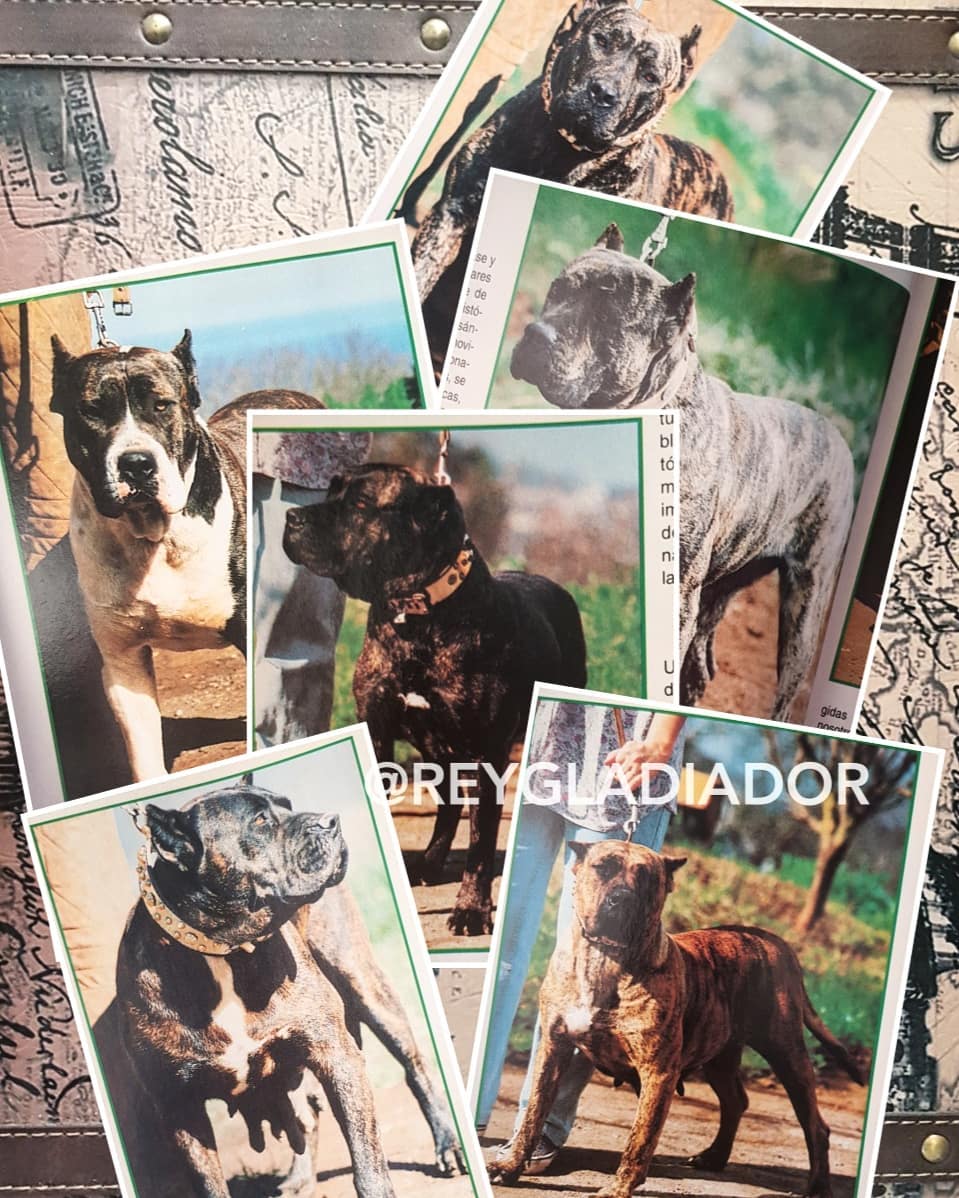 The genesis of the present day Perro de Presa Canario dates from the middle decade of the 1970’s. In 1989, this breed was recognized by, the Royal Spanish Canine Society (RSCE). In the month of June 2001, the Federation Cynologique the International (FCI) recognizes the Dogo Canario. New name, new standard, in other words, a new canine breed entered the scope of the official Cynophilla (FCI).

The Spanish Club of the Perro de Presa Canario, from it’s foundation was more than a club of the breed opened to all fans and breeders, but was a kind of private enterprise in which there was room for (basically breeders) those who accepted their directives. In this club never had place the true Perro de Presa Canario, with its traditional coats (include the black one and 30% of white). For the directors of the CEPRC – till the moment of the change of name of their dog and their club – the eagerness of protagonist and the obsession to sell dogs has been the fundamental thing.

NAME CHANGE before NOTARY PUBLIC: In Santa Cruz de Tenerife, on May 25, 2000, before Lucas Raya Medina, Notary of Illustrious College of Las Palmas (Gran Canaria) and resident in Santa Cruz de Tenerife “Is make public under number 2334, the agreement adopted by unanimously in ordinary general assembly celebrated in the social seat by the Spanish Club of the Perro de Presa Canario, with date November 27, 1998, in which was accorded to adopt like denomination of their dog, the one known as Dogo Canario, instead of Presa Canario.

If we rely on the dates, we will realize that this name change occurred one year and seven months before the FCI recognized the Dogo Canario. Those of us, that fought for the Perro de Presa Canario, so that its standard was respected – in which all the traditional coats are admitted, by its physical health, by its functionality refuse to accept the separation the Spanish Club changed the denomination of their breed of dog before a notary.

We denounced this action on many occasions, The Spanish Club did not respect the standard of the recognized breed as was accredited by the Royal Canine Society of Spain: among other things, they did not accept the black coat, nor the 30% white, etc. In fact the directors and followers of the CEPRC were not breeding Perro de Presa Canario but another thing to which they have ended up calling Dogo Canaios. These dogs are foreign to the Canarian tradition and does not interest us.

Therefore, the thing is very clear, the Perro de Presa Canario stays and is more alive than ever.

The Dogo Canario was initiated officially by the FCI in the year 2001 as a new Canarian breed; now we will see the future that awaits it.

After the exposed thing, its clear the Perro de Presa Canario follows its natural track – the one without doubt belongs to him. As for me, I remain a breeder of the traditional Perro de Presa Canario and officially leave the Royal Canine Society of Spain as of 1998. From this point onward, all Perro de Presa Canario produced by me will be sold with a pedigree known as LOIC (Book of Origin Irema Curto), with DNA (done in the faculty of Veterinary of Complutensian University of Madrid). We will mention that our breeding females and stud males will be free of Hip Dysplasia with certificate  AVEPA).

The Content of his Character. Perro de Presa Canario. Quote: “Character and aptitude. Its appearance is extraordinarily powerful. Harsh gaze. Especially gifted for guarding and defending, and for steering cattle. Firm temperament. An able fighter, a characteristic given to atavism, or throwback. Deep low bark. Noble and tame in the family and untrusting with strangers. In the past it was frequently used as a fighting dog.”

This a far cry from the German shepherd standard, which calls for “extraordinary courage”, and the ability to “attack on his owner’s command.” It seems to me there’s a lot of misinformation floating around about what the Presa Canario is and how it should be measured. For the life of me, I can’t see how one clause taken out of context (“gifted for guarding and defending”) could possibly mean:

We should apply SchII courage tests to green dogs

SV-style requirements should apply to this breed at all

Catch work is not the BEST measure of the Presa

The Presa’s role as an atavistic fighter should be super-ceded by its new, American role, as a personal protection dog.

Don’t get me wrong, I’m a member of a local SchH club and we practice every week. But my dog is not a German shepherd. I have absolutely no intention of measuring her by anything remotely resembling the GSD standard, or police/military evaluations of the ideal dog. Just wondering how many out there share my views, or have a different take on the subject.