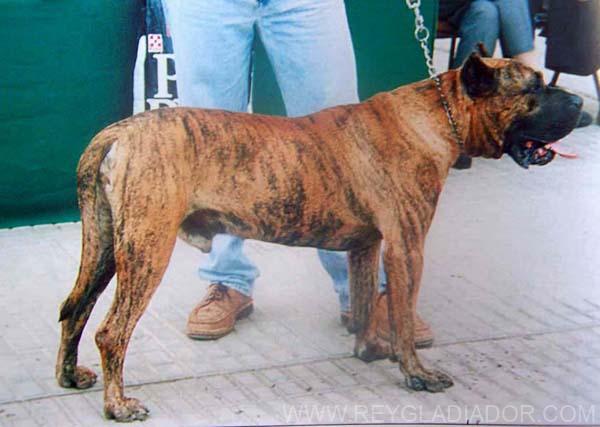 The old English breeders at the header of genealogical books used to describe the animals they wanted to produce, establishing their essential characteristics, the ideal model of the breed that they were attempting to establish. Knowing they were working on one of the most malleable physical species, the dog, which had produced a great polymorphism among its individuals, giving much importance to the precision of the specific desirable characteristics. From these descriptions, were born the breeding standards.

The back of the dog is one of the fundamental elements in its anatomy and is determined for which it is destined by the breed, existing notable differences between a trotter, a runner, a dog of prey, etc. In the Breed Guide of the Presa Canario, approved by the RSCE there is a relative point at the dorsal line of this breed that is necessary to embellish.

The Standard says: “superior line: straight or with a little fall from the withers to the buttocks.

Buttocks: to present equal height withers–buttocks, does not constitute a defect.”

From the reading of which we deduce:

2nd) It does not describe the desirable form of the buttocks.

1st point: The descending line is preferred because even admitting that it may be straight, there is no doubt in indicating that the buttocks of said rectitude (equal height from withers to buttocks) does not constitute a defect. It tries to move forward to whatever doubt over the correction of the straightness, putting it indirectly in prohibition. It is evident that the standard only tolerates the superior straight line, preferring the descending line.

2nd point: It does not describe that buttocks but indicates a peculiarity of the back, that it is not a defect becomes superfluous and if it were a defect should be written under the epigraph “defect” of the same standard. The indication is moreover gratuitous, now that with preference it has indicated that the superior line can be straight, that is to say, to present equal height withers to buttocks.

The proper standard puts in evidence its lack of rigor by indicating to us that the posterior extremities have “angles with little accent”, without taking into consideration that the first consequence of a descending dorsal line is to accentuate the posterior angles.

I think that the standard is so imprecise and confused on this point. The dorsal line of the Presa Canario should be LIGHTLY ASCENDENT from the withers toward the buttocks (or very straight), according to whether we want to accentuate more or less its constitution as a gladiator. In no way should it say, “with a little fall from the withers to the buttocks.”

Having the advantage of being more descriptive and precise than the official standard, this conformation of the back is more in agreement with the demands of a dog of prey and is more in line with the breeds of equal function.

It represents a cinological error that gives this discrepancy between the official standard and that other “officious” standard but endorsed by the applause of many in the Canaries who work for that selection of the Presa Canario. It is precisely in its beginnings when a breed needs more exactness and precision in it breeding standard.

The dorsal region, constructed from the 1st dorsal vertebra up to the 13th, serves as a seat to a strong muscular mass, the dorsal muscles (cervical trapezium, thoracic trapezium, great dorsal; facial thoracic-lumbar). This muscular mass supports the weight of all the anterior part or posterior of the trunk during movement, so that the point of support is made above the anterior and posterior members. And its importance is not only fundamental during movement, but constitutes the center of all actions and reactions in the body. In the Presa Canario, the dorsal region should show ample intercostal spaces. The insertion of the great dorsal muscle over the apophysis of the last dorsal vertebra contributes greatly to having good strength of the dorsal line.

The renal region is constituted by the seven lumbar vertebrae. If in any dog the renal region is important, in the dog of prey it is vital, because over this same area will gravitate a great part of force during combat. Therefore the muscular mass here should be relatively short, but very powerful. In the Presa Canario one should avoid a flat renal region, sign of deficient development of the vertebral column and the muscles that cover it. The ideal would be to find firm muscular masses, rounded and with good development. We must demand a secluded kidney, but not excessively short, which would cause problems of flexibility.

The buttocks is constituted by the iliac, long bone that carries two principal divisions: ilium and ischium. Since the ilium is the only bone structure of the buttocks, this will be wide, straight. short, flat, inclined, or fallen according to the various positions, forms and dimensions that the former adopts. On demanding a “straight, medium and wide” the standard of the Club draws with clarity the characteristics of this anatomical part. On requesting a straight buttocks, it says that the same will have an inferior inclination to 30 degrees horizontally. This buttocks of moderate inclination has the advantage of allowing a major development and length of the gluteous muscles that go from the ilia crest to the femur, which will contribute to greater back power. The back support is fundamental during combat. Nevertheless we must avoid a flat back, because excessive flatness injures movements, especially in the long step, where the dog raises his knees excessively and elevates his legs, very extended, raising them in the most serious cases completely horizontally. It is important to remember that the obliquity of the iliac favors the inclination of the femur in a contrary sense, so that the distensive strength of the muscles is transmitted as an impulsive force to the vertebral column. The major or minor width of the buttocks is in direct proportion with the demands of a development of strength or velocity. More strength, more width; more velocity, less width. In the Presa Canario, like a dog that must exert a great strength, the buttocks must present a considerable width.

Equilibrium and the Thorax

The Presa Canario, like all dogs selected for development of muscular strength in the dog of prey, velocity and resistance in running stay relegated to a second place. Everything in this breed is at the service of strength. Short, compact neck, wide bones, well arched rib cage, etc. Like a combat dog, it should have the center of gravity very close to the ground, which will increase its equilibrium. It is evident that all dogs that have to show strength must have the fullest possible base of support and therefore a notable development of the width and length. Both standards (that of the RSCE and the Club) require a dog inscribe in a rectangle, in the torso they specify “its length normally exceeds the height at the withers in 10–12.² This is because the proper standard in its description of “general appearance” tell us that we see “a mesomorph whose torso is longer than its height at the withers.” Nevertheless, the Corporal Index of the dog proposed in the standard of the RSCE is the closest to the values of a dolicomorph that a mesomorph. The height at the withers for males is the standard of the RSCE from 59 to 64 cm. and that of the Club is 61 to 66 cm. We pick a male with the height of 64 cm., a height included in both standards. The length of its torso will be between the values of 70.4 and 71.6 for both standards and the thoracic perimeter will be 80 cm. for the RSCE and 85.3 for the Club.

As for the dog proposed by the RSCE the Corporal Index is situated between the values:

Both values are contained between 80–85 that correspond to the Corporal Index of a Mesomorph.

From here we can see that the thoracic perimeter equals the height + 1/4, what the RSCE standard requires is not certain. We see a dog of apparent lightness, with little thoracic diameter of these proportions. We can only reduce the Corporal Index by virtue of a normal development of the torso in it lengthwise diameter, so that the dog would be inscribed in a square. If we want the Presa Canario to be a mesomorph whose torso is inscribed in a rectangle, we must accept a thoracic perimeter of similar dimensions to those proposed by the Club, equal to the height + 1/3, if it is desirable to exceed such proportions.

We have observed that the whole constitution of the Presa Canario is conceived to make of it a powerful seizure, that immobilizes its prey, but endowed with a relative agility. There is a need to have a light ascension toward the buttocks. From the pure physiological point of view it would result that the hind quarters being shorter than the front would project towards the rear, the center of gravity, overloading with useless work the posterior members, that moreover would be injured by a diminishing of the length of the bones. The straight back or ascendent toward the buttocks is common in seizure dogs. The prototype of the gladiator, the English Bulldog, presents a small hollowness behind the shoulders, the lowest region of the dog. From this point the dorsal spine elevated toward the loins whose crest must be higher than the shoulder. In the great dogs of prey the dorsal line is straight. For the Dogs of Burdeos, Profesor Kustler in 1910 required a wide, straight muscular back. Also we find a straight dorsal line in the Mastino Napoletano and in the Mastiff. What we never find in dogs of functionality equal to the Presa Canario is a descending dorsal line from the withers to the buttocks. Moreover the reality of the dogs attests to the small ascendance of the dorsal line of the Presa Canario. The specimen whose photographs illustrate this work do not allow for doubts. Finally, according to the anatomical data: if we study the skeleton of a dog, by tracing a straight line along the vertebral column following the rings of the vertebrae, along their inferior face, we verify that the column, is inclined toward the front. The major length of the spinal apophysis of the dorsal vertebrae reestablishes on a level to join the withers. Excepting this, the lumbar and dorsal vertebrae are at the same level. A standard must be the wise joining of the reality we have with the ideal that we want. In the Presa Canario the reality is a straight dorsal-lumbar line, ascending slightly toward the buttocks and the ideal… coincides with reality! 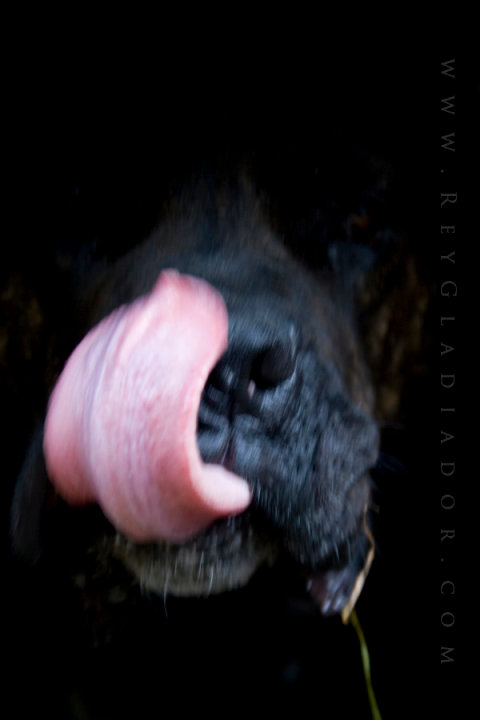 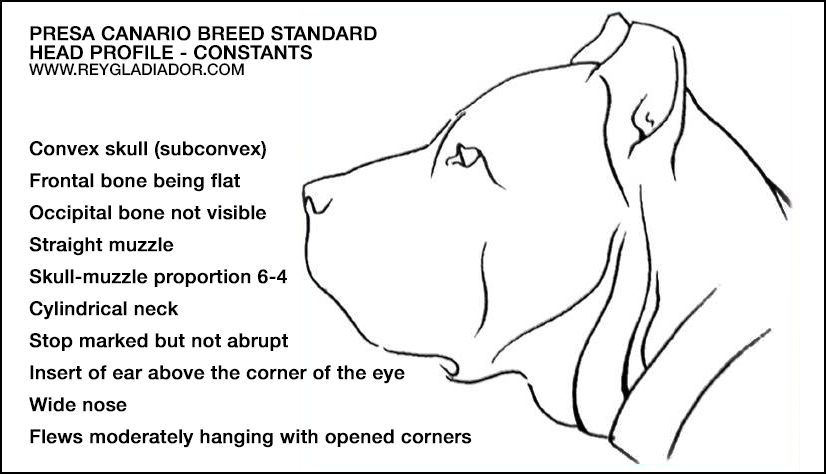