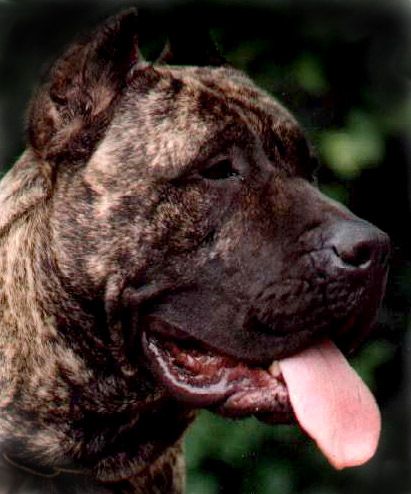 What all breeders and owners of Presa Canario agree on is the impressive character that it has. The standard of the breed states: “their aspect denotes power. Severe gaze. Especially gifted for the function of guard and defense and traditionally for the conduction of cattle. Impetuous temperament, skilled fighter (tendency that shows for atavism), low and deep bark. He is gentle and noble in family and distrustful with the strangers. In the past he was used especially as fighting dog.”

Through this description of the character of the Presa, it could be arrived to the conclusion that he is a versatile dog, able to develop several jobs: conduction of livestock, guard, defense, companion. Now well, the dog of Presa Canario is a dog of guard and defense par excellence. It is enough with seeing their impressive physical appearance and their severe gaze, deep, almost human, in order to stop but bravest from trying to penetrate the property of the protected. However, the Presa Canario is not just external aspect: it is an incorruptible and very territorial guardian, their work consists of to look after their territory and the people and animals that constitute the family environment. Nothing prefixes to their work: he could be enjoying the happiest moment in company of his master, delighting with a great food, or playing with the rest of congener that live together with him, if he considers that somebody or something puts his territory in danger he leaves everything at once in order to defend that with the most forceful form and effectiveness. Although they try to bribe it with any trick, either food, threats, good words, and even, in the case of the males, with the presence of a female in heat, he won’t allow anybody franks his territory, unless his owner orders to him to stop in the guard. Anyone that who meets the Presa Canario is aware that their courage doesn’t have limits, being able to any thing as such defending that he consider as his, opposing great resistance despite many beats and threats received.

Upon speaking the standard of “impetuous temperament” we should not understand that it is an aggressive dog; on the contrary, one of the most noted characteristics of the Presa is the security that has in itself, of which leads it to not attack unless provoked.

Habitually is the expression “it has much character” applied to an aggressive dog; it is a generalized confusion to identify the character with the aggressiveness. In most of the cases the aggressiveness is not symptom of character, but of insecurity and of the existence of any unbalance psychological in the dog. The character shows in a balanced and sure dog.

Concerning their “ability in order to fight,” tendency that exhibits for atavism, considers that this has been product of their use in the past as dog of fight. At the present time, and fortunately, these customs have disappeared, and with them the idea that the Presa is a dog quarreler, that could not cross down the street with another of the same species without rushing to attack it. The Presa, as consequence of their security, it doesn’t need to prove their strength looking for fight with their equal; now then, this doesn’t mean that if it is attacked or threatened it is going to leave fleeing; on the contrary, he in that moment will show with whole might that, unfortunately, what made him the dog of Spanish fight par excellence.

The coexistence of the Presa Canario with other dogs isn’t only is possible, but rather, also, it is simple. The upbringing of the Presas, together with other dogs since is puppies, facilitates the coexistence between them, and, for example, in the case of the dogs shows, it will permit us to present with worth mentioning our specimen are not without the occasioned fights and scandals as could happen in other breeds.

“Serious bark and profound” The Presa is not a dog excessively barking. On the contrary: the same as you think of their ancestor the Perro de Ganado Majorero, only he barks in the case he could not attack, he is say, a Presa that this looking after you and you are considered threatened he attacks and doesn’t mediate any bark, only bark if he could not attack, well because he is tied or separated by a wall from the aggressor. When it barks, the Presa also impresses, because their voice is hoarse and profound.

“It is gentle and noble in family” This tells little of the fidelity and passion that the Presa Canario shows with his. The Presa “is known” to very little people, family and close friends, but to which they know them to have all type of celebrations and demonstrations of affection every time that you lend your attention. Concerning the relationship of the Presa with the children, it is fascinating see the care with which the dog “supports” the childish games, he never shows aggressiveness with them and it reveals their younger face, enjoying in countless occasions of their company..

“Distrustful with the strangers” It’s not he is just distrusted, but rather it doesn’t remove them the eye of above. The distrust of the Presa should not be confused with the insecurity. The distrust means that inclination of all the movements that it takes place with the stranger so that stranger could not plunder him so that he could not plunder you unaware in a hypothetical attack. Also, the Presa is a dog very observant and curious; nothing passes him unnoticed.

Concerning their attitude in front of the owner, I am supposed to tell that the Presa is not a dog shepherd, although it could carry out functions driving livestock, and this means that he will not follow their owner where he wants that it goes, the tell, it is not a dog dependent of their master. If I have to define to the Presa with a single word, in their relationship with the owner, it would tell that the dog is “hanging” of their master, he constantly observes you without missing detail of your movements, but he doesn’t need a command in order to make the decisions that he considers necessary in order to solve an accidental situation.

It is not true that the Presa Canario is not adapted in order to live together in a flat (and I tell from my own experience). He doesn’t only adapt perfectly to the housing, but rather he makes it enchanted, now then, like all the dogs, he needs a minimum time of exercise and daily amusement and once arrived back at home one will be in his place, to be near their owners, lying without bothering at all.

The magnified character of the Perro de Presa Canario is supposed to be inside a physical structure that completes the parameters of the standard radial, is tell, a Presa Canario is not serious if only has the single qualification a stupendous guardian character, but lack of typical, of the external morphology that is described in the canaria pattern of the breed elaborated by the Espanol Club of the Presa, of the same form that, in my opinion, neither is a Presa Canario that which it has a pretty physical appearance, but that demonstrates a total lack of character and an apathy or shyness that are not characteristic of the breed. It is necessary to look after, therefore, both aspects in order to could breed Presas Canarios. This work is in the hands of all the breeders of the breed. That we owe, selecting the crossings that we accomplished carefully in order to obtain a dog with the balanced but very pronounced character and with some physical qualities that conform to the racial pattern and that it will be the that we hope to be this year with the official recognition on the part of the Federation Cynological International- it triumphs internationally in the shows of beauty and it leads to our molosoids to get the international projection that deserves.

I don’t want to finish without making a mention to the aptitude of the Perro de Presa Canario in order to overcome tests of work, civil training, RCI, Ahi etc. has dogs like “Volcán” property of Senor Escabar, that approximately comes to the degree 3 of RCI and that until now have achieved some excellent results.

It is evident that the Presa Canario is my passion, and it is because, although I also have another breed, I consider that he has all that I could request in a dog. I invite you to that you discover all the excellencies of the Perro de Presa Canario.

View thorough the window in the morning