REPORT: THE PRESA CANARIO IN TENERIFE

by the then president of the Spanish Club of the Presa Canario Dog Manuel Martín Bethencourt.

In Tenerife, like in the other islands of the Archipelago, mainly in Gran Canaria, the Presa Canario Dog was used for the guard of houses and properties, for the conduction of the bovine cattle of the land, denominated “coarse cattle”, and overall for the combat of dogs, liking that according to what is believed, is introduced in the Canary Islands due the English colonization. 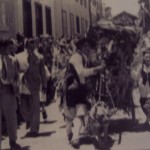 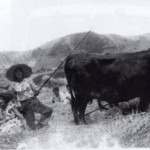 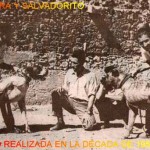 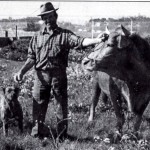 The breeder crossed without no racial concept. The only thing that they looked for was that his dog was good guardian and a great fighter that left outside combat the dog which he faced. The color was not important, although there was a great predilection by the brindle, the tiger one, and in smaller degree the fawn ones, both footwear and collared in white. The north zone of Tenerife was the most inclined to this type of spectacles. It is possible that such circumstance had to do with that it was -also at the present time- the one of greater concentration of coarse cattle (bovine canary), whose it struggle was task of the dogs. Peculiarly in this zone, also is denominate to the Presa Canario “Coarse Dog” and frequently “Bordon”. Some authors have related this designation like deformation of the word “bulldog”.

Some great breeders of the Presa Canario were Juan el Marchante, Andrés el Penínsular, The Guardian from El Ortigal, Gabino, El Caporal, The Guardian from La Esperanza, Luciano and Polo Acosta, owner of famous “Marruecos”, that had bought to Juan el Marchante, and of which was claimed was the Champion of the perros de presa. This dog was imported to Tenerife from the Island of La Palma.

In Santa Cruz de Tenerife, in the wood hut there was a species of deposit in which trained dogs for the combat.
In years 40 was decreed the prohibition of the dogs fights, and although some is celebrated sporadic, the presa canario falls in damage, until almost its total extinction. This situation is agravated by the great popularity acquiring by other foreign breeds, in special the German Shepherd.

Also the conflict of the Spanish Sahara decimated remarkably the population. It is in decade 70 when the recovery begins, in resurging slow but uninterrupted. 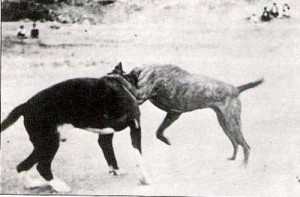 In 1975-76 three male units of Gran Canaria are imported to Tenerife, from the locality of Sardina, Felo and Monzón, brindle and fawn respectively, as well as a brother of mother of color fawn, Firpo, all they children of the female named Diana.

On the other hand, were imported from Arucas (Gran Canaria) a pair of unit, Boby, brindle male, and Piba, fawn female of the line of Juan Santana. It is the import of these units of Gran Canaria those that crossing with presas of old lines of Tenerife, as they were Manolo and Troika of Don Silverio Mesa, Turca of Don Telesforo Hernandez, etc. settle the lines of present blood in the present time.
In year 1974 Manolo is crossed with Barde, from where is born Taoro of Don Jose Manuel Teixeira

In September of 77 a daughter of this crossing, Tamai I, is mated with the male Felo of Mr. Quevedo, being born exemplary like Mahán, Beneharo, Guacimara, Guama, etc. Again Felo mated a dog of the Boby-Piba line, called Mora, of where they are born exemplary like Ioya and Guanche de Pilar Udías.

Manolo, male of Don Silverio Mesa was mated with Gara, female of Mr. Quevedo of where is born Drago, of the Dr. Murube del Castillo.

This dog is mated to Mora -daughter of Boby-Piba- of where Jama, Urma and Caimán are born.

Urma, with a dog of unknown origin, whelped to Bruco and Tauco, establishing a differentiating line.
Blood of Bulldog is introduced, through the crossing of Guama (Felo-Tamai) with Gruñón (Bulldog), of where Campeón and Teguise are born. This occurs in March of 1980.

Elvis, male brindle with influence of Gran Dane, was mated with Tamay II (Boby-Piba), being born Bardino, that establish new line of blood.

Felo is mated to Jama (Drago-Mora de Irema Curtó) from where is born Yaiza, of Don Mario Montequi and Day of Don Joquín Reig. This female (Day) is mated with a Bullmastiff, of where Jacho and others are born, establishing a differentiated type.

Mahan (Felo-Tamay I) is mated with Turca, dog of old line, and is born Porky, that constitutes a new line. These we could say are the most significant crossings of re-breed of the Presa canario in Tenerife, until year 1982. As of this moment the Spanish Club of the Presa Canario is constituted, that agglutinated great part of the breeders in active, and canalizes the breed through the Committee of Selection and breed.

Thus a new stage of crossings began, adding the descendants of previously mentioned the refreshment of the blood of Bulldog that contributed unit like Teguise and Campeon. With these crossings was tried to give structure to them that were slight, due to the great existing consanguinity.

Fruit of these new contributions are exemplary like Patagón, Traque, Caporal, Daute, Faycán, etc. Are consolidate units of great structure and type, paying attention the differentiating type of the racial group of Tenerife.

Crossings with Bullmastiff brindle in 1984 are tried, also with unit product of Bullmastiff-Stafordshire Bull Terrier, although these crossings have little repercussion in re-breed. Also test with DogoArgentino is made, that was complete rejected.

example fotos of few different breeds from the beganinng of XX century:

Also the crossing of a female, Morita (Felo-Mora de Irema Curtó ) with the Lirio of Don Manuel Alemán, of Arucas (Gran Canaria), contributes blood of Neopolitan Masstiff, although it has not been continued.

In synthesis, in the racial group of Tenerife we find us with a distributed population of the following way respect to lines of blood:

As it is deduced off the previously exposed, when being in Tenerife the fights totally extinguished, are made the crossings taking care of the phenotype of the reproducers, using a high degree of consanguinity to fix the type. Like consequence, a high homogeneity in the existing population has been obtained, but also for this reason problems of character, structures and dysplasia of hip are appearing. At the present time, the Spanish Club of the Presa Canary is in the arduous task of promoting crossings between unit of the two canary provinces, to the object to unify the type of the Presa Canario in all the region.

Published in the first bulletin of the CEPPC.

About the Presa Canario dogs on the Islands

Growing up around dogs