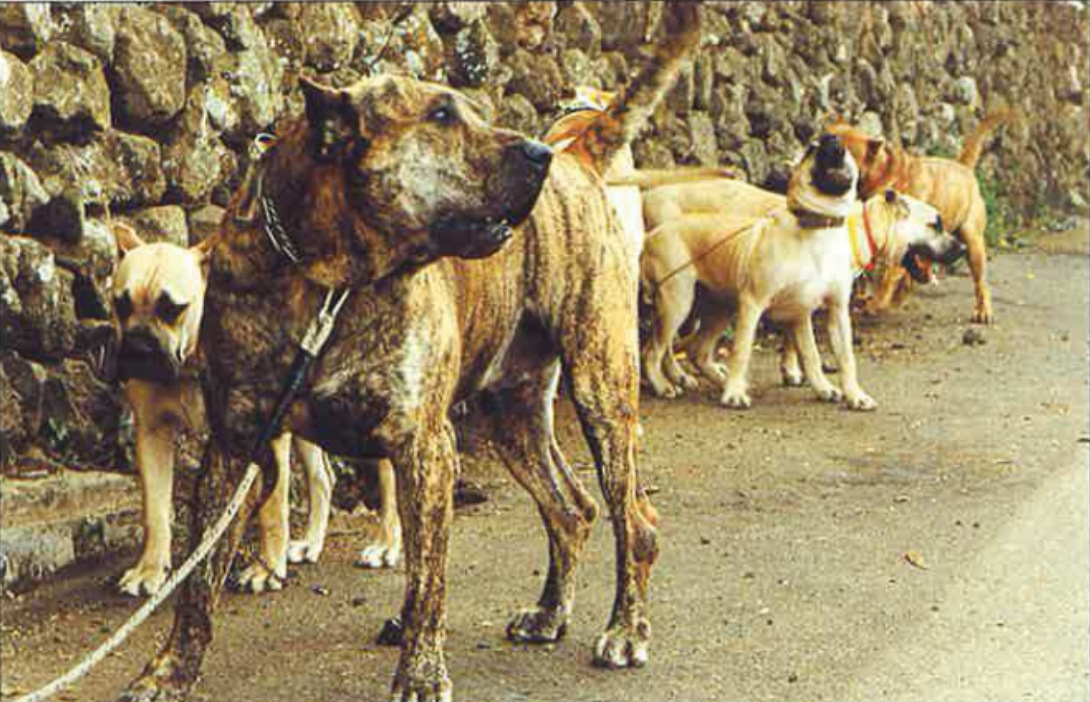 As stated on many occasions by the prestigious cynologist Carlos Salas in his brilliant works, the history of any canine breed, in the modern sense, begins when a Book of Origins is established, a breed standard or standard of type accepted by a group of breeders and a registration starts, with an ample population having similar characteristics passed from generation to generation. Well, the recovery of the Perro de Presa in the Canaries was, for the first time in its history, given a real boost towards full recovery when the CLUB ESPAŃOL DEL PRESA CANARIO, founded in 1982, drew up a proposed standard of type and sent it to the ‘Conserjería de Agricultura del Gobierno de Canarias’ (Canarian Government Ministry of Agriculture), which favored the idea and published a triptych, which was sent out, with a picture of “Felo” on the front, to all interested parties.

It was then, for the first time, that parameters defining the morphology of the dog were established and the name Presa Canario was definitively adopted.

From that moment on, following the criteria laid down in the breed standard, intensive breeding began. Groups of breeders from Gran Canaria, Tenerife and the other islands in the archipelago began to show interest.

The Club also reached an agreement with the ‘Real Sociedad Canina de Espańa’ (RSCE), which agreed to the study of the future standard through regional meetings, in October, 1986 and in June, 1987, in Tenerife and in Gran Canaria, respectively, where 234 specimens were studied. This study, carried out by representatives of the ‘Comisión de Razas Espańolas’ (Spanish Breeds Committee), was complimented by those carried out and contributed by the Club Espańol del Presa Canario.

The breed club selected a group of 50 specimens in Tenerife and an equal number in Gran Canaria, taking details of identification and measurements, and established up to 21 points of reference. They also took into account the study carried out by Fernando Real Valcárcel for his paper on the Presa Canario, presented at the 1st Symposium in Cordoba, 1983.

Emulating what was stated by Carlos Salas in his work on the English mastiff, at the time of the rebuilding and recovery of the Presa Canario, the pioneer breeders, who had been involved for years, had to face those, fortunately few, who claimed that “original pure bred Presas were almost extinct”, when, in reality, that “original purity of breeding” never existed. This narrow-minded, dishonest attitude, which was propagated in numerous papers and publications, did a great deal of damage, through the confusion it caused, to the slow and difficult recovery.

Others, clinging to a similar idea, supported mediocre specimens with little uniformity, which were more in the line of the Mastin but, according to them, had a certain breed purity, and which was more absurd than dubious. However, there was a large group of breeders who made up the Club, and who clearly understood that the most important thing was to decide “in which direction we wanted to go” rather than “where we had come from”. This philosophy helped the recovery of the breed. 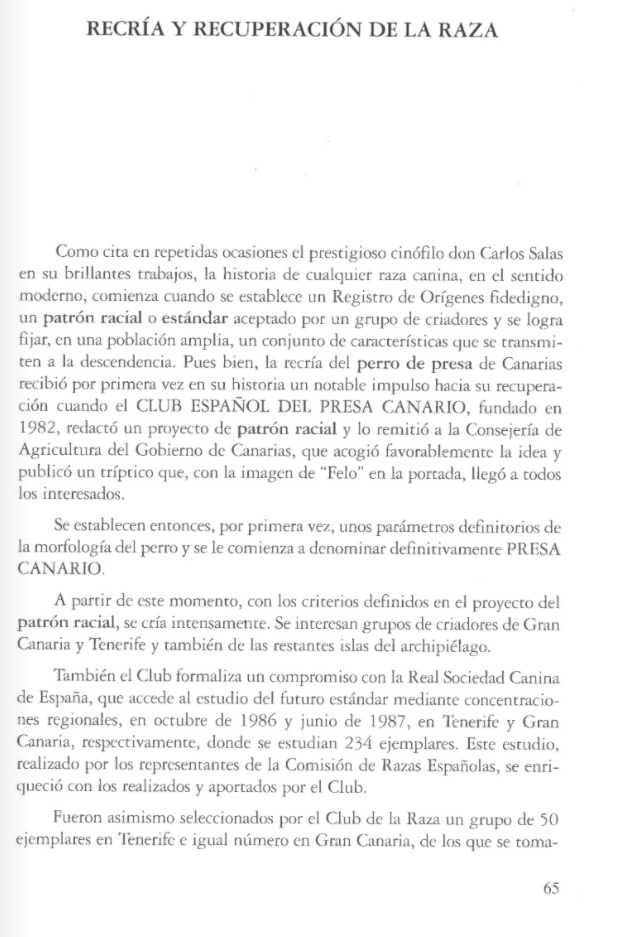 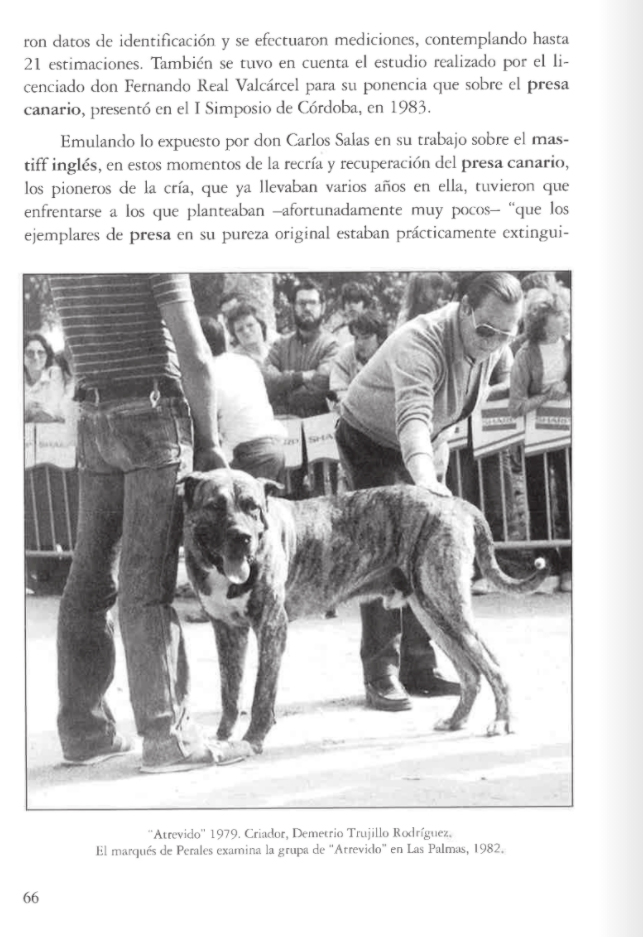 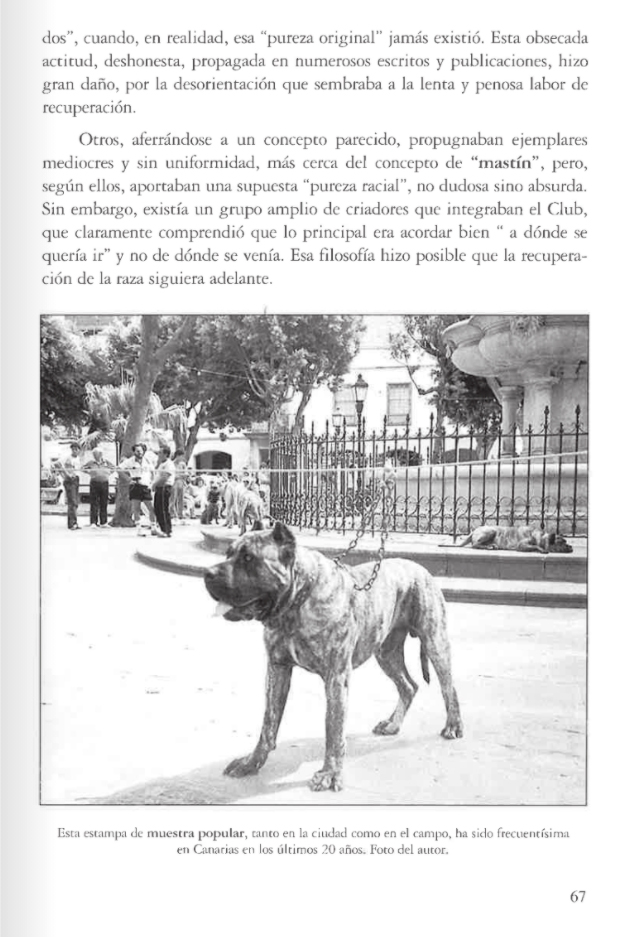 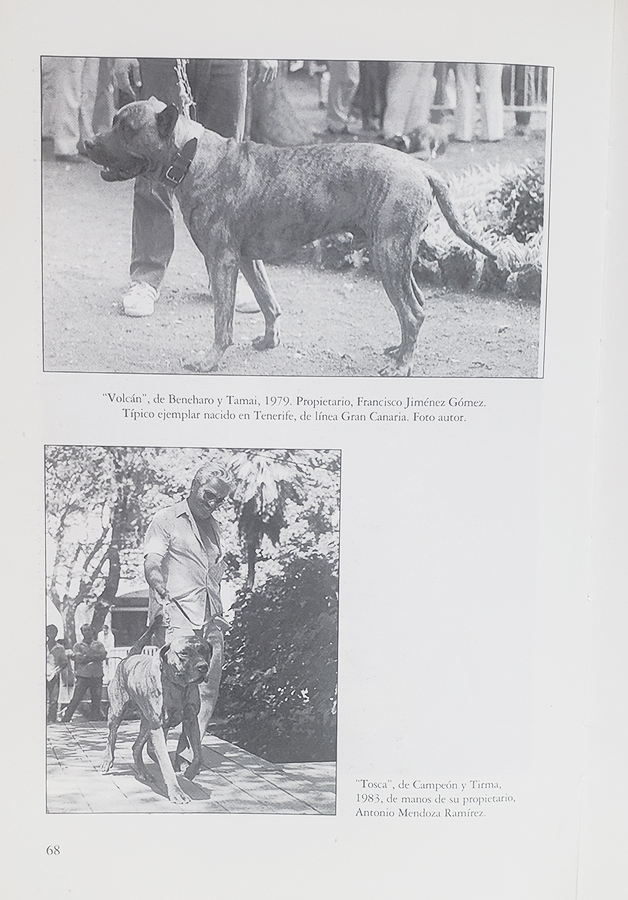 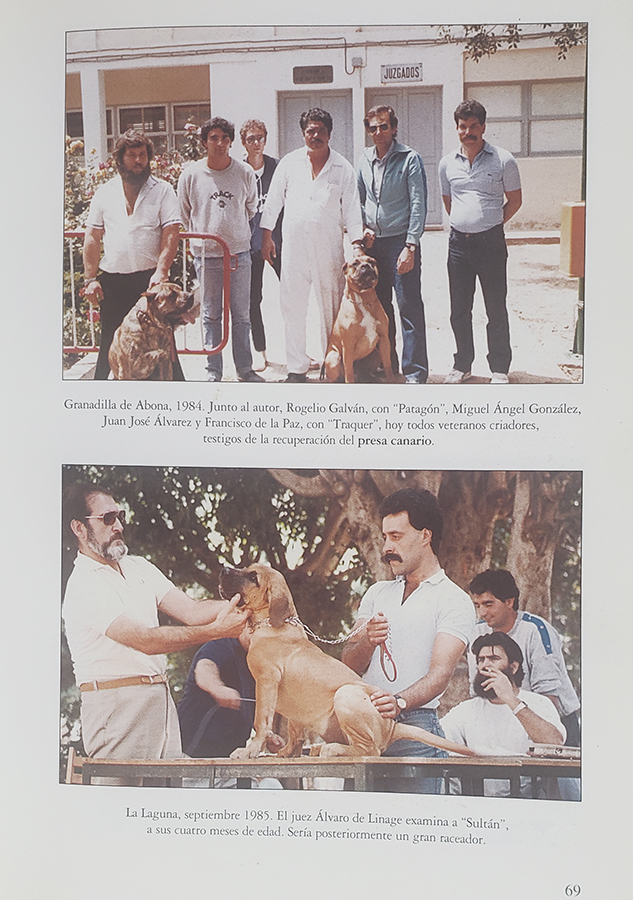 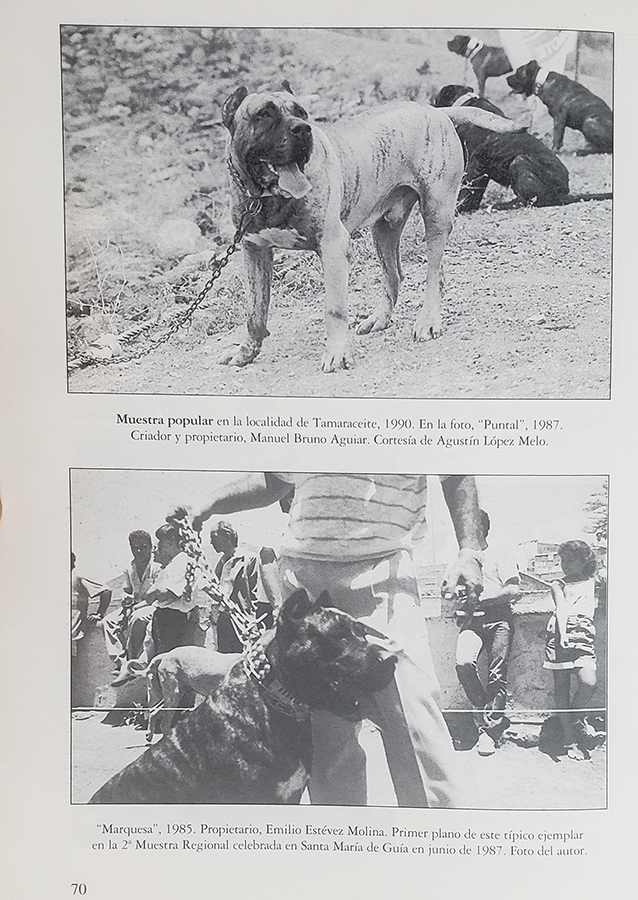 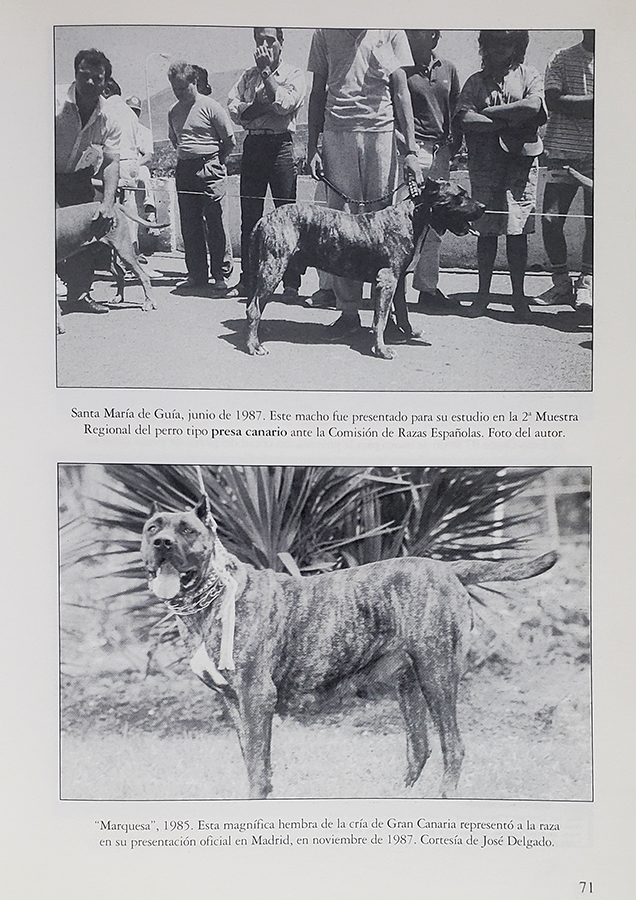 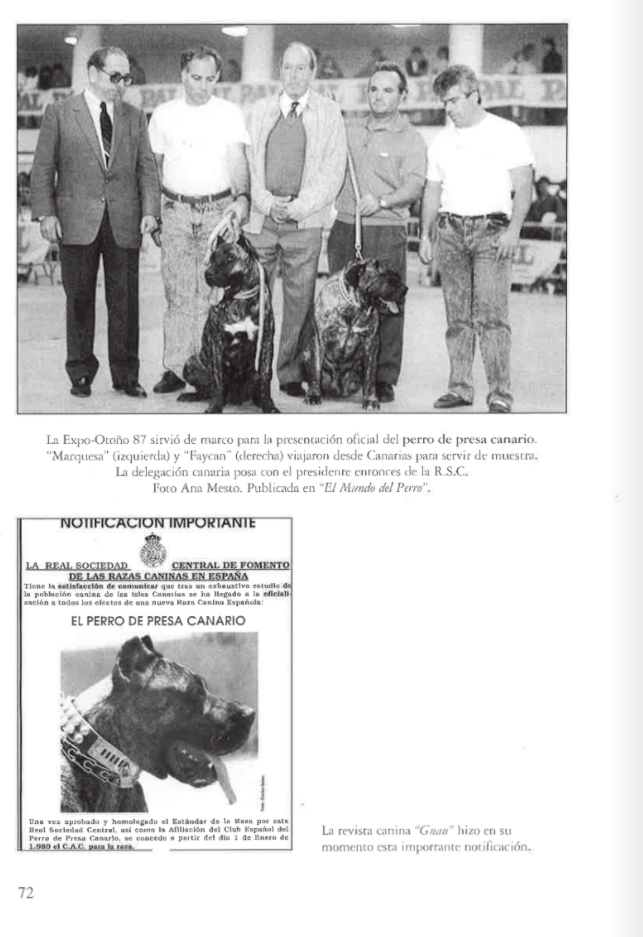 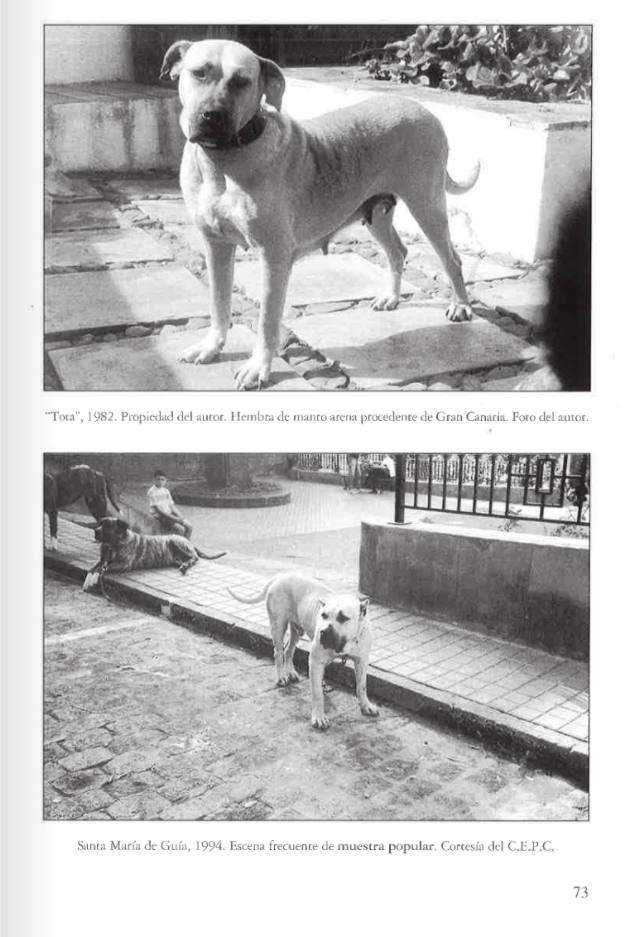 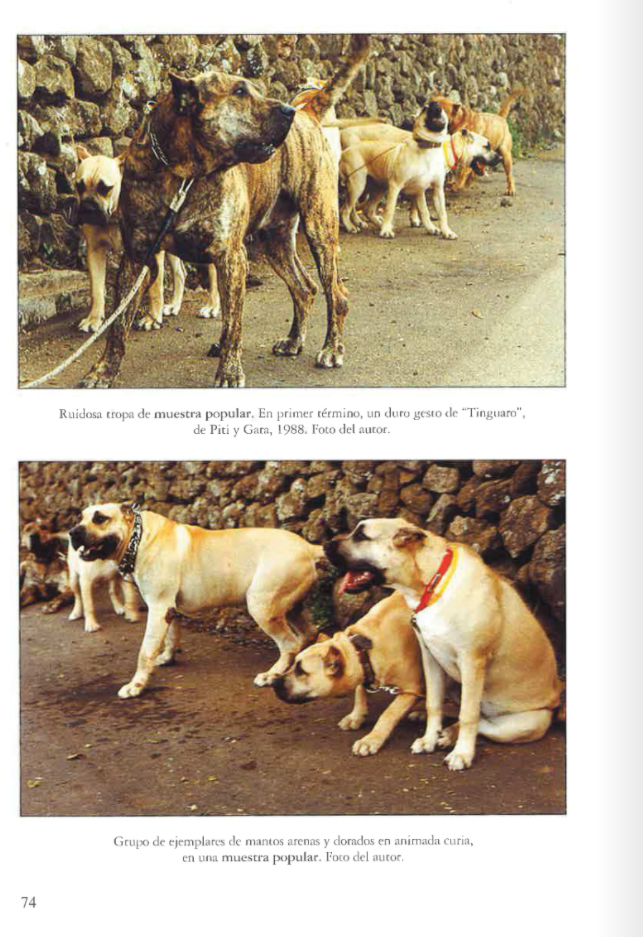 The Presa Canario and the Parallel Presas