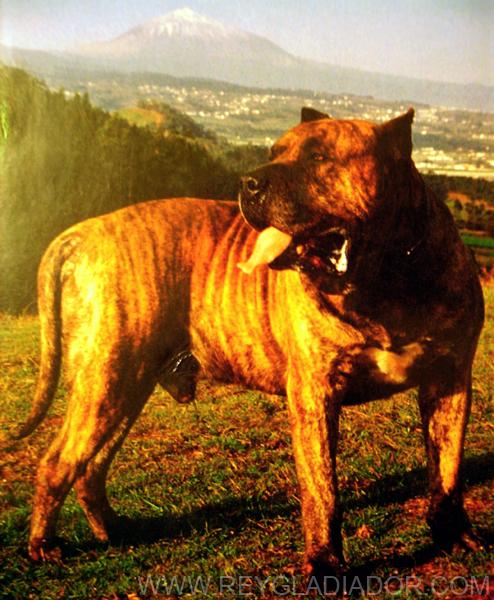 II. Origins and diffusion of the breed

A dog originally from the islands of Tenerife and Grand Canary, on the Canary Archipielago, where it grew because of its function as a fighter.

It was essentially the result of the crossing of the Bardino or Majorero derived from the island of Fuerteventura and molossoid dogs carried to the islands.

It inherited its temperament from its ancestors the Bardino or Majorero, prehispanic herd dog, diffused from long ago throughout all the Archipielago: rustic.contentious and of a fiery character.

The aforementioned crosses, gave an origin to an ethnic group of dogs of prey of the intermediate type predominately of the tiger color or tawny and both spotted in white.

Several decades would pass before the resurgence of the Presa Canario would begin in an uninterrupted form at the hands of breeders that had lived and known their traditions and existence.

1. Description of the whole (general characteristics)

Dog of medium size, eumetric, straight profile. Of a rustic appearance and well proportioned. It is a mesomorph, whose torso is longer than its height at the withers, accenting lightly the character more lengthwise in females. Compact head, of a square appearance and wide cranium. The upper lips cover the bottom lips with a certain laxity. Mucous of black color. Strong teeth of wide implantation and generally well enclosed. Brown colored eyes of medium size. Ears of high placement. Cylindrical neck, strongly muscled and covered with thick elastic skin. Light double chin. Short and straight back. Wide implantation of the tail. Wide chest. Moderately set belly. Anterior extremities perfectly plumb. Of wide and strong bones. Back foot. Powerful and muscular posterior extremities with not very marked angulations and correct plumb lines with the back foot slightly longer than the front. Elastic and thick skin. Short hair without sub-hair, that presents a certain ruggedness. Fur inside the tiger colored range, or tawny and black with a black mask.

Its appearance denotes power. Severe look. Especially endowed for the function of guard and defense and traditionally for the driving of cattle herds. Of an impetuous temperament. Able fighter, tendency to resemble ancestors. Serious and deep bark. Meek and noble with the family and distrusting of strangers. In the past it was used as a fighter.

General appearance–The Presa Ganario is a dog of medium size, of strong constitution and of rustic appearance. It is a mesomorph and therefore medium in its proportions. The torso is a little longer than its height at the withers. To its current function as as guard or for defense and as a cowherd is added in the past the function of fighter to which it was dedicated frequently and as such conformed morphologically to the qualities of power, stability, and flexibility of movement. Its power comes from a compact and well developed muscular system, with a chest of great width and diameter. Its members are not excessively long, but rather short and robust with good separation especially in the front, motor propulsion in the dog of prey, the fuller the base, the better the stability of the animal. And lastly, a deep torso of moderate length, inscribed in a rectangle will present a flexible movement. as corresponds to a guard dog, whose function develops in spaces that are not very large.

Character: Its temperament is firm and of even psychic equilibrium. Frank character aptitude that allows a rapid adaptation to learning.

In specimen that can exceed the height limit one should demand a correct proportion between the dimension of the extremities and the volume of the torso.

Brachiocephalic type. Cubic tendency. Compact Appearance. The proportion cranium–face is 6 to 4. The frontal nasal depression is not forward.

Commentary: Of a compact appearance. Brachiocephalic. Its length represents approximately 40% of the height at the withers. Good muscular development. In proportion with the rest of the body. Serious appearance.

Convex anteposterior and transverse sense. Zygomatic arch very marked with a great development of the temporal and masseter muscles. The depression between frontal cavities is marked. The occipital crest is little marked.

Cranium: Convex in the anteroposterior and transverse sense. The frontal bone tends to be flat. The depression between frontal cavities is marked and can embrace 2/3 of the cranial length. The zygomatic arch is well marked. Great development of the temporal and masseter muscles. Normally its width is equal to its length.

Occipital: Not appreciable for the robustness in the muscles of the nape of the neck and for the occipital fold of lax skin.

Of less length than the cranium. Normally it represents 40% of the total head. It is of great width as a prolongation of the cranium. The craniofacial lines are straight or slightly convergent.

Comment: Of less length than the cranium. It represent 40% of the length of the head–some 10 cm. Base width, with much fullness by the good development of the malar and elevator muscles, diminishing a little towards the nose. The dorsal is flat. The craniofacial lines are straight or slightly convergent.

Comment: Wide, strongly pigmented in black. Ample fossa. Insert in the same line of the nasal cavity. Its anterior face is found slightly declined with respect to the anterior edge of the snout.

Medium thickness and fleshy. The upper slightly hanging and in its union, seen from the front forms an inverted V. The mucuous are of dark color, although they can appear rose colored. Nevertheless the dark is desirable.

Teeth with very strong base of implantation, very strong and generally well enclosed. Given its origin one admits a slight prognathism. Typical bite of a dog of prey. The absence of a premolar is not important because the mission of the dog of prey is carried out with incisors and canines which ought to be aligned and comely. The canines present full traversal distance.

With well marked fluting of the rose tone.

Slightly oval. With good separation. Eyelids pigmented in black. The color varies between medium brown to dark brown in accordance with the color of the fur.

Comment: Large. In a sub frontal position and well distanced, by at least double of its length. Not sunken nor raised, with a brilliant and noble look. Slightly oval eyelids, pigmented in black. The color of the iris is influenced by the fur, normally medium to dark brown.

Hanging when they are complete. Of brusque extirpation and medium size and high implantation. The folds generally like a rose. If they are shortened, according to tradition, they stand erect or semi-erect and of triangular shape. The specimen with complete ears will compete in the same conditions as those with clipped ears.

Comment: Of high and brusque placement and of medium size. Of short and fine hair, they are kept flat over the cranium or folded. If they are clipped, they will be erect. The clipping tends to be short, without being excessive.

Cylindrical, straight, compact and very muscular. It is very short and its inferior edge presents loose skin that contributes to the formation of a half double chin. Medium length: between 18 and 20 cm.

Perfectly plumb, of wide bones with powerful and visible muscles. The elbows should not be too close to the rib cage nor open towards the outside. The back foot, narrow. Some solid, black or white, in relation to the coloration of the fur.

Comment: The height of the anterior extremity of the elbow is from 32 cm. or 50% of the height to the withers. Vertical, with good bone. The elbows are situated on the flat half of the body, they should not deviate towards the outside-open elbow–but they will never be close to the body.

Of round form and proportioned to the volume of the animal, nor too round nor extend. Narrow fingers. The vestigal finger on the internal face. The foot pads very well developed and black. Dark toenails. Can be white, according to the fur, but they are not desirable.

Its length normally exceeds the height at the withers by 10–12%. Wide chest and with great fullness with well marked pectoral muscles. Seen frontally it should arrive at a minimum at the elbow. The thoracic perimeter will be equal normally to the height + 1/4. It is well to supercede this proportion. Ribs well arched of cylindrical structure.

Chest: Wide and of great amplitude with pectoral muscles well marked. Diameter of the dorsal sternum is a median of 31 cm.

Thorax: Medium perimeter of 88 cm. The difference between the straight perimeter and the height at the withers is more than 20 cm. which establishes a full and deep thorax.

Straight, with slight falling from the withers to the buttock.

Comment: Straight-ascending slightly toward the buttocks. Apparent saddle on the back, just behind the withers.

Equal height of the withers and buttocks is not a defect.