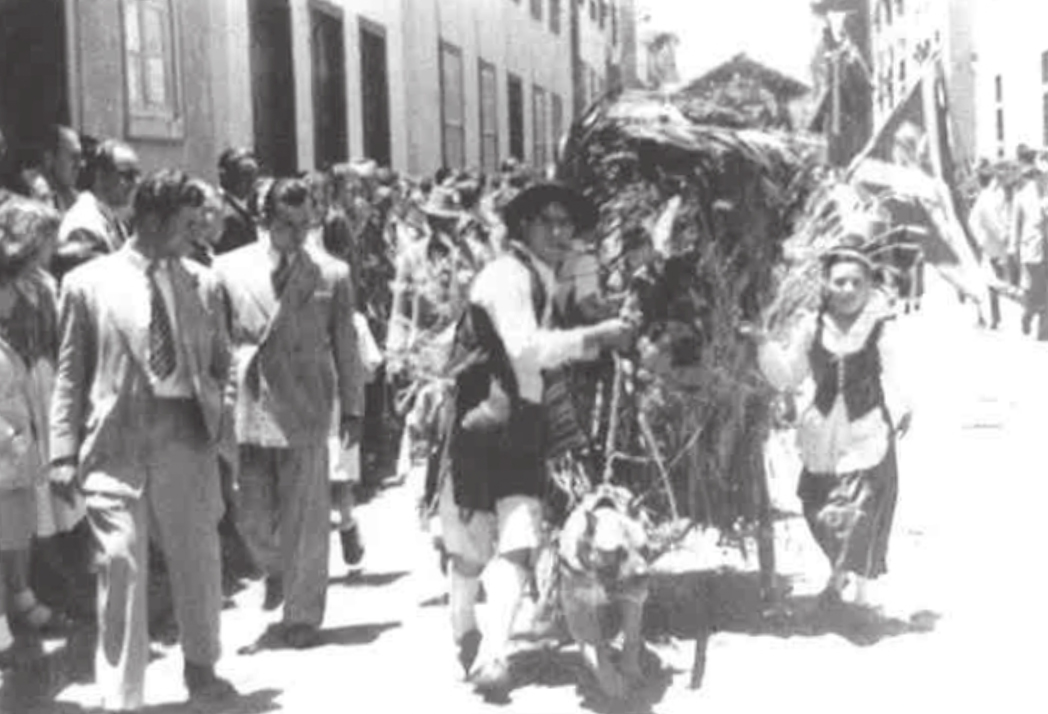 The most obvious physical quality of the Presa Canario is its solidity. It is a medium sized animal, that is compact, rectangular, low set and broad , and whose presence enhances its solid appearance. Its bone structure is very robust, with strong bones covered with well developed muscles, and well-shaped and well separated limbs, a wide trunk that is longish, corresponding with athletic” type. Its an animal well equipped for fighting, with all the attributes necessary for such a hard activity, for which it was occasionally used.

Its strong build gives it great self-confidence and dissuasive power.

The quality that stands out most it’s its seriousness, letting it be a great deterrent towards any threat, quality that is completely essential in any guard dog. Sever and steady gaze, coming from massive and solid head is one of its strongest assets.

As an territorial animal, if its boundaries are threatened, it will be prepared to attack, witch will be violent only in extremal situations.

In spite of its strong build, its temperament fits that of a “Moloso del Presa”. That to say, it is not completely difficult and combative, it is, on the contrary is equipped with nobility of solid character. However, as a dog with great aptitude for fighting and whose task nowadays is to guard and defend, in case of a threat it reacts quickly. Its character, between sluggish and sanguine, allows the dog to be permanently vigilant, in spite of its apparent serenity.

It can be found calmly lying down, with its head between its paws, glancing around, missing nothing, but at the sign that something is wrong, it will be on its feet, arrogant and firm, tail held high, and showing great confidence.

For as long as we have known, the mission of the Presa Canario has been to guard and defend, and has been blessed with an anatomy made for combat

As a guard dog for the family home or for land, both in the country and in the town, it will quickly learn the area or territory to be protected. In this learning task, its own nature and capacity to assimilate what is being taught are of help, because, although it is a Moloso de Presa, which are usually stubborn and obstinate, the Presa Canario is quite malleable, thanks to its obedience and willingness to learn.

However, although we do not know the future possibilities of the Presa Canario in the working field, we expect them to be much greater than at present. This dog does not have the ancestral throwback of obedience that a Rottweiler or a German Shepherd has, as it is a more primitive animal, but with a few more generations of work, training and obedience added to its inheritance, the possibilities could be extraordinary.

As a PROTECTION DOG, it has an intrepid temperament and is unstoppable in an attack if provoked, but particularly because of its complete dependence on its owner, with whom it identifies completely.

As a FIGHTING DOG, on the basis of its ancestors, its physique, developed for fighting and its alert character.

It has often been said, and taken as truth, that the Presa Canario was created purely as a fighting dog, but we can categorically say that this is not so.

When the Perro de Presa of the islands was crossbred with English fighting breeds, there were morphological changes in favor of the Presa, but it was always a multipurpose animal.

It is true, and still fresh in the memories of many enthusiasts, that in some places in the islands, in the country as well as in the towns, there were, and still are, certain groups and individuals who were particularly fond of dog fighting, and who bred their dogs with this in mind and training them specially to fight. In any case, this group was a minority.

The Presa Canario has always been bred and has always lived in a mainly rural environment. The country and stockbreeding way of life in the islands has always been hard and no one could afford to keep a dog purely for sport. A man living in the country or the outlying districts of a town would normally own a Perro de Presa and work always came first.

In years gone by, there was no news, neither in print nor by word of mouth, and there was no radio or television either, so, in the little free time a Presero had, it was quite common to organize dog fights, such as those organized in South America with dogs of Presa type or in the Balearic Islands with their “Ca de Bou”, but this was never the main reason for having a dog.

Apart from its everyday tasks, which were carried out rigorously under the severe hand of the owner, a Presa Canario would fight if ordered to fight, which meant occasionally and under direct orders of the owner. And the dog would do as it was told and would continue to work. That was as far as the Presa Canario went as a fighting dog.

The Presa Canario was also used as a CATTLE DOG, to subdue and herd cattle, as its bite was too hard for goat and sheep herding. The ‘rough’ cattle, typical in the islands, was always and still is herded in the country by the Presa Canario. The work in this field is double, in that the dog acts as a herder and as a guard dog. Apart from watching over the herd from higher ground, it will also drive the herd when the time comes. The role of the owner or herdsman is almost unnecessary, as the Perro de Presa knows exactly what time to gather the herd, to take them into or out of the pens, when to water or move the herd to other grazing lands. It is a dog that bites only occasionally, as the herd falls under its control easily. 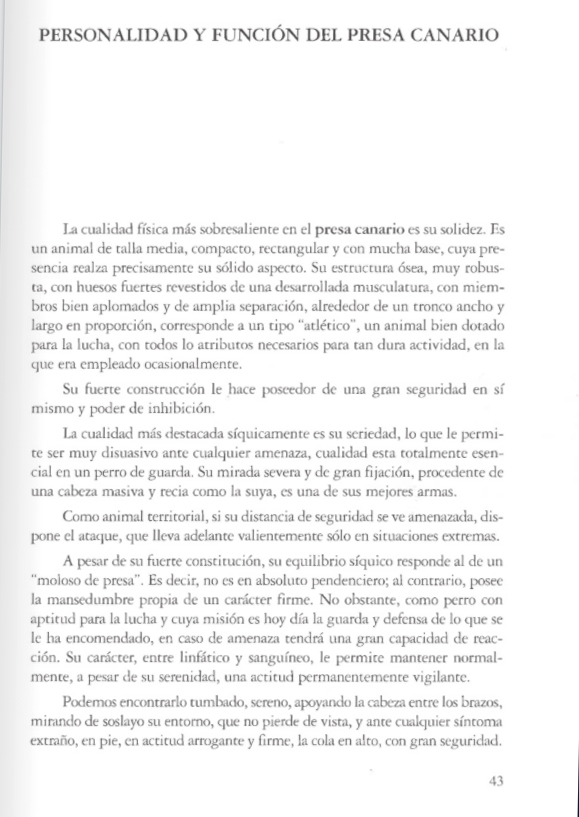 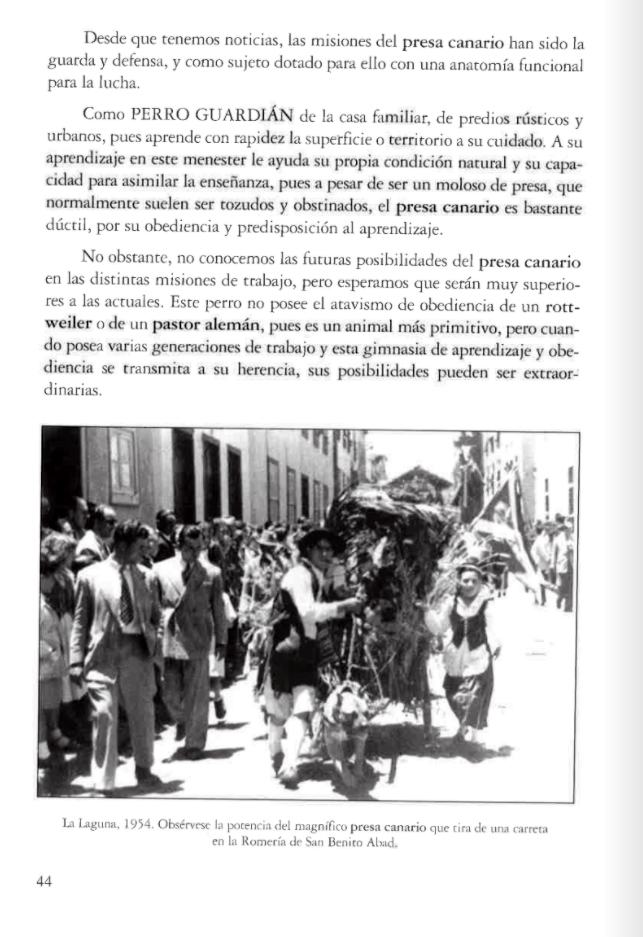 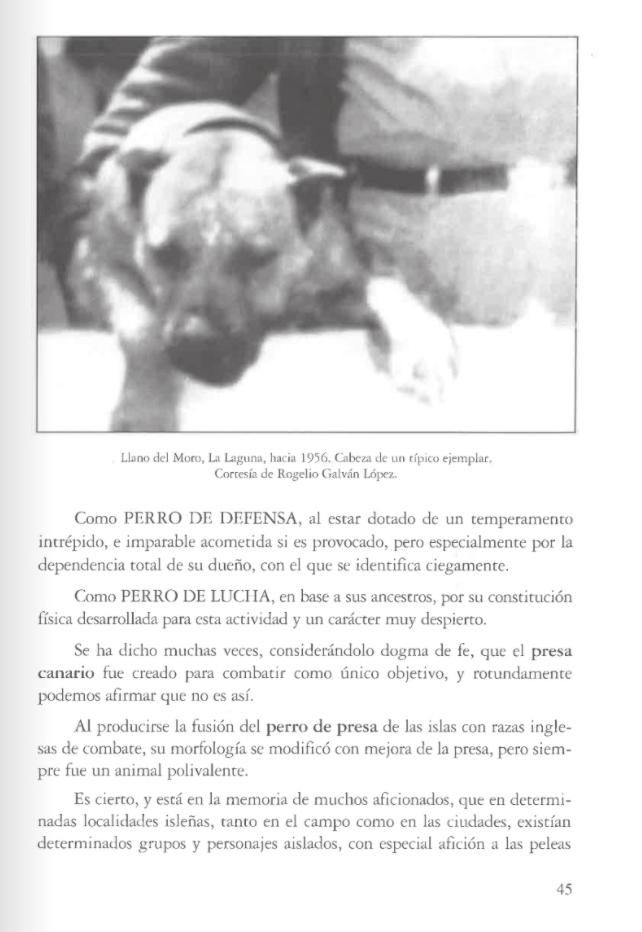 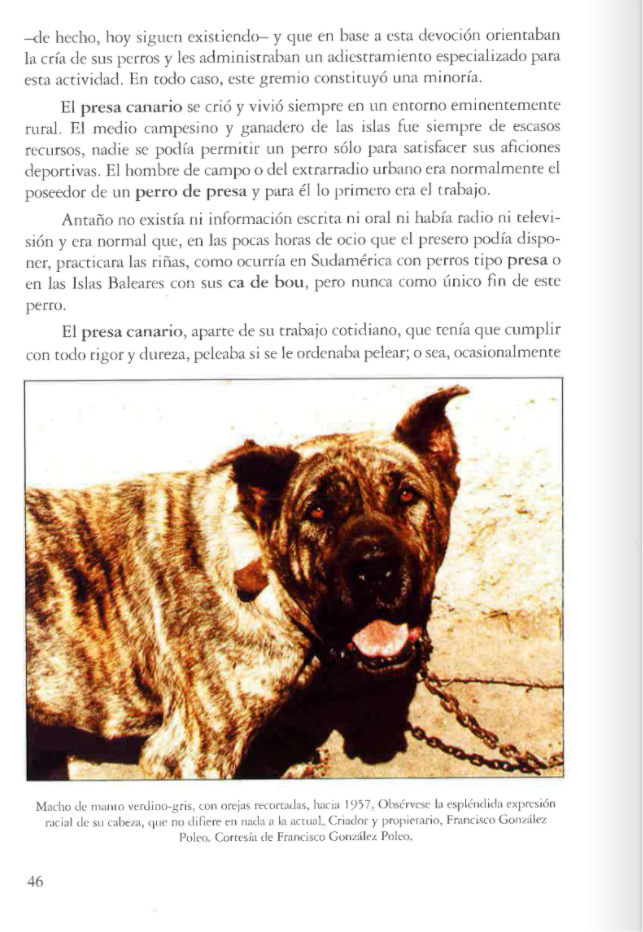 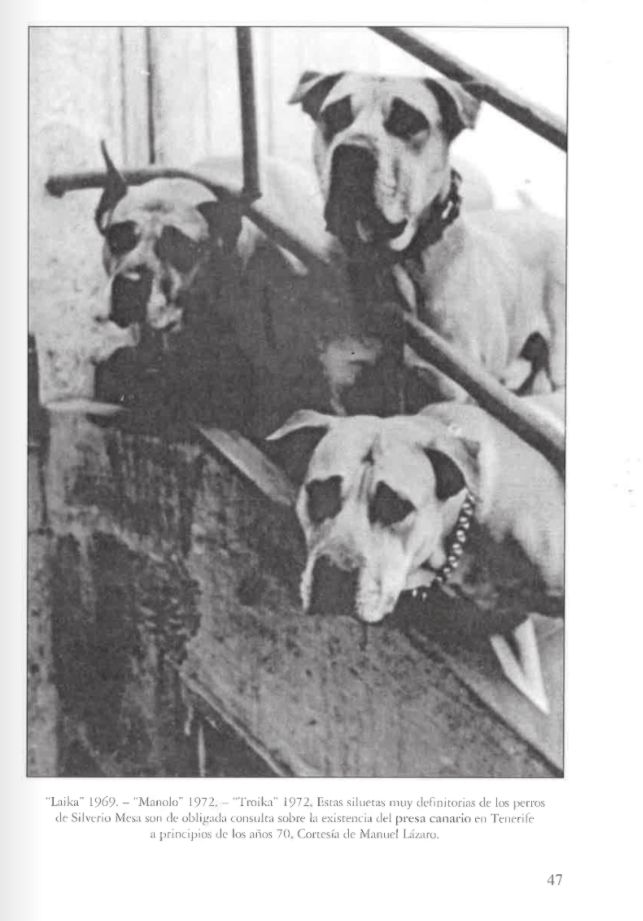 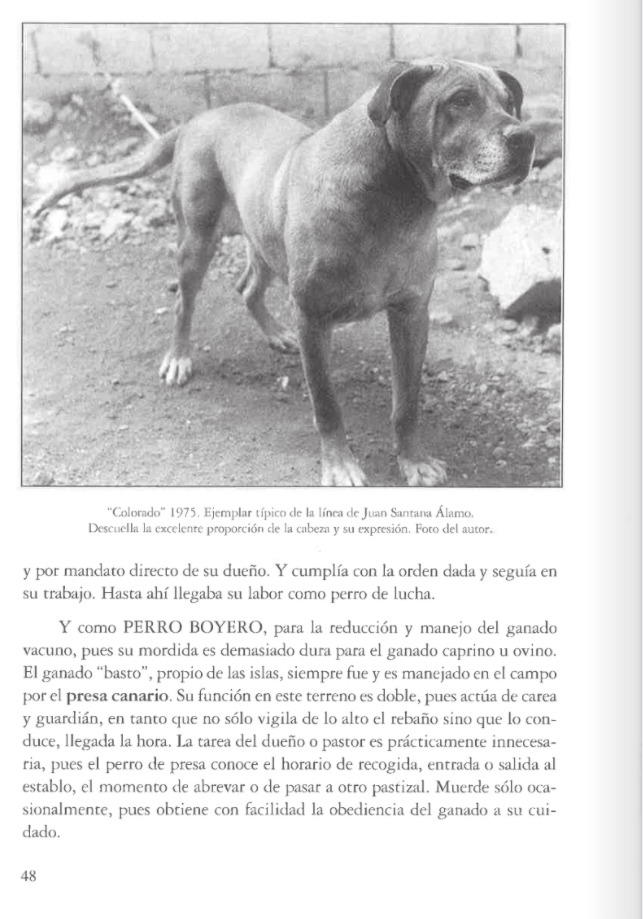 Tupi and Xixi on the farm