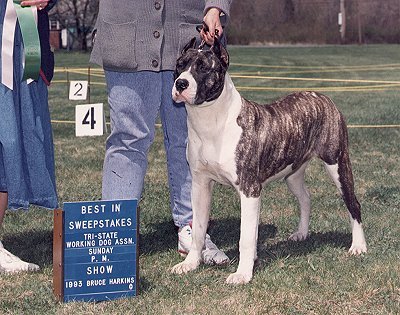 This article was published on the part of PCCA back in the day. I do not have the date saved. Autor unknown

Las Charo- charo doesn’t have meaning, but charro translates to cowboy. Charro is a masculine singular word, las translates to “the” but in the plural feminine form. One should note that in Spanish you do not combine a plural with a singular. It is improper grammar to use las with either a singular or a masculine. A cowboy would be “el chorro” a cowgirl “la charra”, plural would be los charros or las charras. These mistakes would not have been made by a native speaker.

It was a fact of the times that few people really knew what was right and only believed that a Presa Canario simply had so many natural variances that it was OK to simply choose the type you liked best and breed for it. There was a split formed from the beginning with people favoring the more terrier type Peter Curely imports against the people who chose the very heavy loose skinned Deer Run mastiff types. Then along came the dogs of Show Stopper Kennels.

Show Stopper kennels of NJ is the third major piece to the recipe for disaster to this breed in the United States. Coming into the breed just a few years after Tobin Jackson, naturally began with Deer Run stock. Justice, Train, Titan and Bad Mama Jamba also known as Snotty. Donna Kelly used to handle Arbaco in the ring for Tobin Jackson and can be found listed as the owner of the dog in the first edition of the “Encyclopedia of the Dog” by Dr. Bruce Fogel. This was a mistake as she did not own the dog but was assumed the owner because he was in her care. When Arbaco was sold to Mac Harris rather than to Richard Kelly he suddenly began denouncing the blue dogs. Furthering his necessity to remove Deer Run dogs from his pedigrees. It’s known that Show Stopper dogs have produced blue offspring. Below is the pedigree of a dog bred by Pride Rock Kennels from an SS female to a Schmidt bred Male. (*note Bullrog is a grandson of Arbaco)

Deer Run Panzer Show Stoppers Mercedes CGC Show Stoppers Calybos Ch Show Stoppers Medusa TT Gr Ch A1 Blue is a double dilute gene. The dog must have 2 copies of the dilution gene to express a dilute coat color. Each parent can only contribute 1 set of genes to each puppy, therefore we can see that both Chance on a Bullseye and SS Mercedes are carriers of the dilution genes. Genetically either Calybos or Medusa passed this gene to their daughter Mercedes, who in turn when bred to another carrier dog produced a blue coated pup.

No discussion of the American Presa would be complete without discussing what can only rival Arbaco in disaster to this breed. This would be the importation of Toño and Princessa by Bill Jarvis and Travis White. Toño and Princesa were born in Las Palmas de Gran Canaria and fans of these dogs (read owners of descendants) like to believe in the authenticity of these dogs, being that they are of Spanish birth. However what must be noted is the parentage and circumstances surrounding these dogs. Toño was sired by Rokote, a male owned and created by Julian Celis. His sire was Roco, a dog of bull terrier and great dane crossing. His dam Chumga, a purebred Bullmastiff. Rokote was one of the participants in the first open registration of the breed in 1989. Unfortunately for fans of this breed, the first registration of the breed caused a few set backs due to the fact that each and every dog presented, regardless of phenotype or genetic background was passed and granted paperwork. This meant many more long years would need to be spent breeding out the undesireable dogs that had been admitted to the stud books. Toño’s dam Shila was also granted restration at this same event. Shila was sired by Rambo, another half Bullmastiff.

It also must be noted that neither Toño or Princesa received conformation at 1 year of age which is a mandatory requirement in Spain for a dog to receive his pedigree to be bred. Therefore, if one were to attempt to verify the registration numbers of either dog, they would be unsuccessful. No conformation means that the dog will be purged from the system as unconfirmed for breeding. In essence, these dogs no longer exist to the registration body.

These two dogs produced several litters, but the most notable dog, one most often found in American pedigrees, foundation female for Show Stopper kennels, SS Medussa. Some like to call this the “most influential” line in the United States, when it would be more accurate to describe Medussa as the female most inbred upon in this country. She appears in the pedigree of nearly 100% of Show Stopper dogs alive today.

Medussa was a female that exceeded 28 inches at the withers and weighed in excess of 140lbs, not to mention that her coat was predominantly white and she had a strong tendency to produce mantel coats… as found in the Great Dane breed. Not surprising as her sire Toño was a descendant of Great Dane.

However, what is most interesting is that for over twelve years Medussa was registered, shown and bred with a completely different pedigree. People told the supporters of Toño for years he was born from Rokote and thanks to their diligence to prove the origins of the dogs, proved those people correct. Below is the pedigree that had been registered for Medussa.

All of these names were cross referenced with records in Spain and the only dogs above who were registered were Ebro, Roco, Turco and Kol. However, this pedigree is false for two reasons. The first reason has already been discussed. Toño’s parents are Rokote and Shile, not Ebro and Ursa. Toño was born in May of 1989 and Roco, sired by Turco, was born in June of 1991. Impossible for Roco to be the grandfather of Toño. So that leaves Ebro as the single dog in this pedigree to be verified registered and he has little influence on the breed today. Most breeders completely abandoned the descendants of Rokote because better dogs and lines were available. Sometimes something is “rare” for a reason. Not because it is precious, but because it was unwanted.