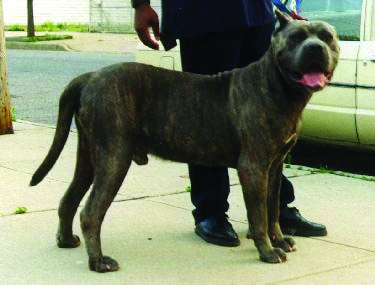 This article was published on the part of PCCA back in the day. I do not have the date saved. Autor unknown

To discuss the history of the Presa Canario in America, one needs to first look back at it’s introduction and understand that in reality there are actually two distinct breeds sharing a common name. First, there are Presa Canario that were officially recognized by the FCI in June of 2001 as breed #346 Dogo Canario. These dogs have been imported or have ancestry fully descending from dogs from Spain. Fully is meant as all generations, not one or possibly two dogs, but the entire pedigree. Then, there are dogs that solely or in part originated in the United States, comprised of various crossings of different breeds of dogs falsely given the name Presa Canario. These are the dogs that shall be discussed. The American Presa.

The first Presas were introduced to the United States in the late 80’s although there are two different individuals who lay claim to being first American owner. Tobin Jackson of the former Deer Run Kennels in Frenchtown, NY and Peter Curley, a dog importer (some would use the term broker) of Merrimac, Wisconsin. Whoever came first is not really important because both of these men were responsible for the destruction of the breed before it began. The third guilty party is Richard Kelly of Show Stopper Kennels of NJ, but his roll would follow a bit later.

Back in the late eighty’s early ninety’s as owning the “rare and unusual” became fashionable and ads began to appear in US magazines such as Dog Fancy and Dog World for many foreign and exotic dog breeds, amongst them was the Presa Canario. Little was known about the origin, history or even the way the dog was supposed to look. Little bits of information were all that people had to go on and everyone simply assumed that those breeding these dogs over here were the knowledgeable ones. Dr. Carl Semencic wrote a brief chapter regarding the breed in his second book “Pit Bulls and Tenacious Guard Dogs” which included many other foreign dogs that most Americans had never heard of. Wild tales of the dogs catching moving vehicles by the tires was printed as a testimony to the strength and determination of this mastiff from the Canaries along with a couple of photographs of an example of this breed. Not having any comparison to view most people assumed that this dog was a proper example of the breed, when in reality it was a very atypical example showing a lot of influence of Bullmastiff. To clear up the tales of the dogs catching cars: these were tales handed down from breeders of old, breeders of the first half of the 20th century. The Canary Islands was a more simple land with a more rural way of life and not yet many paved roads in those areas. Older model cars were still driven around the countryside, which due to the road conditions generally reached tops speeds of 15-20 miles per hour, slower on mountainous roads. So while this folklore may be true in some instances, a large dog catching a Model A driving 10 mph on a grassy rutted road isn’t exactly the awe inspiring vision one is supposed to have when believing these dogs caught moving vehicles by the tires. Most humans could have accomplished this feat without the help of a dog.

Peter Curley contributed to the confusion of this breed by bringing dogs that lacked breed type and in most cases pedigree. Though some of his earliest dogs were flown in from Spain, they hardly resemble at all what a Presa Canario is. Dogs from Peter ranged from 20” and 70lbs to more than 30” tall, skinny and blue. He brought over dogs from alleged kennels with suspicious names such as “de Selva Libro” (the Jungle Book) and “Malvado Diablo” (wicked devil). Neither of these names are registered Afijo (affix or kennel name) with the RSCE.

Tobin Jackson was the proprietor of the infamous Deer Run kennels that bred show champion English Mastiffs for nearly 40 years. He was regarded as a little more than a puppy mill by many of his fellow Mastiff fanciers and his lines are now known to have spread a lot of genetic defects such as epilepsy throughout the Mastiff gene pool in America. Today you will find breeders advertising Mastiffs as “no Deer Run lines”. But due to the fact Tobin was one of the most well known Mastiff kennels of the time it is he and his dogs who appear in “Pit Bulls and Tenacious Guard Dogs”. During several conversations with the author of this book, he mentioned that when Tobin was interviewed there were no “Canary Dogs” (as he likes to call them) on the premises but had discussed the breed with Tobin while visiting. Not long after these dogs appeared at Deer Run kennels. Tobin had 2 notable dogs at his kennel, Enrico and Arbaco. Enrico was a tall, narrowly built black brindle male who sired many litters for Deer Run. However when Tobin retired from dogs in 1993 little was mentioned regarding Enrico and it was rumored that he took this dog with him, wherever it was he left NJ for. Enrico has few desendents left today. The other male, Deer Run Arbaco (AKA Panda Turf Arbaco) , 29” of blue brindle dog about 4 years old was sold to Mac Harris of Panda Turf kennels. It is Arbaco who had more influence in the American dogs through many more years of continued breedings with his new owner. Arbaco is the major foundation for what is known as the Deer Run line today.

At the time of Arbaco’s birth the Presa Canario was not yet accepted by the RSCE (Spain’s national kennel club) but however, was in its recovery stages via the CEPRC. Arbaco was initially stated as having been imported from the country of Honduras. First mysterious question…. Who goes to South America to import a dog barely known in its native land? The Presa Canario of that time was NOT exported out of Spain with any frequency although a few predecessors of the dogs (foundation presa types) possibly were brought with Canarians who immigrated to those countries. These would not have been purebred or recognized Presa Canario. Later when pedigrees began to be shared it was noted that Arbaco was born from Deer Run Luis (also spelled the English way Louis) and Deer Run Reba, also from Deer Run Louis and Deer Run Isabel and also Deer Run Amore and Deer Run Louise…. which any parents you pick would indicate that Arbaco was born of Deer Run owned dogs and with 3 sets of parents completely made up. The first story is completely false, the second story is partly true. Arbaco was a result of a crossbreeding between a Neapolitan Mastiff, which was also being produced by Deer Run kennels at that time and an American Staffordshire Terrier…. Or in todays common term: a Bandogge. Forget for a moment that his origin is without documentation and simply know that his coat was the steel grey (aka blue) of a Neapolitan or Great Dane. This alone disregards him as ever being a Presa Canario. He is one of the most notable false dogs found in the pedigrees of many American Presas. Kennels that founded their breeding around this blue mongrel and other Deer Run dogs included Panda Turf, Werewolf, Tiger Guard and even Show Stoppers, though they deny this today. Show Stoppers bought several puppies directly from Deer Run kennels and when Tobin retired also bought some of his adult breeding stock. One particular dog was a female named Deer Run Justice, previously owned by Zeek Gibbs friend of Tobin’s, who appeared on their promotional video back in 94 or 95. Suspiciously, you won’t find her in the pedigree of any Show Stopper dog, although on the video she’s shown pregnant. In fact they’ve removed all traces of Deer Run lineage from their dogs. The information from one of the Kelly daughters was that her father purchased these puppies from the kennel manager of Deer Run, who’s name was only given as “Jeff” who was allegedly skimming puppies off the top and selling them for his own profit rather than reporting the births to Tobin.

Arbaco sired such dogs as Panda Turf Abu, (fawn- blue mask) who in turn sired Jerry Curtis kennels male Macho, who’s been falsely portrayed as a Spanish import by his owners and has sired hundreds of puppies over the years. Macho puppies can be found all over the US and while his mother Daza was an import, his sire is none other than Arbaco. Another foundation daughter of Arbaco is (werewolf) Zuma (blue brindle). Werewolf is founded on Deer Run lines and Arbaco and blue brindle and fawn with blue mask and pigment is an all too common occurance in her kennel. Over half of her breeding dogs are of this (non existant) coloration.

Eric Schmidt was another to perpetuate the Arbaco dogs and you’ll find them throughout the NJ/PA area. Though Eric is no longer breeding, his dogs continue mainly through Tiger Guard kennel. Schmidt’s Ella (also blue brindle) who is found in the pedigrees of many Tiger Guard dogs via her blue brindle son by Schmidt’s Bullrog (himself white with blue brindle patches) named Tiger Guard Sher Kahn. Sher Kahn was the sire to several litters at Tiger Guard including Tiger Guard Zeus. Tiger Guard is also responsible for the “rare” red dogs with red pigmentation. These dogs come from his foundation female Jaguar, a Dogue de Bordeaux mix. Not only will you find the Dogue coloration in Tiger Guard dogs, but many more physical traits of the Dogue such as yellow eyes, short and wrinkled muzzles, prominent underbites and large voluminous heads. None of these traits are typical in a Presa Canario. All one has to do is examine the published pedigree of Jaguar to see the truth. None of these dogs existed in Spain.

It’s clear to most that whoever made up these names lacked basic knowledge of Spanish that a Spanish breeder would not have lacked.
Loco Hambre- translates to “Crazy Hunger”…. A dogs name?

Puppies from Zeus and Bronca

Accomplishments of Gladio in Italy