From throughout the 16th century, and according to the “Cedularios del Cabildo de Tenerife” ( The Island Government Records Office, Tenerife):

In agreement with the Island Government of Tenerife, as from 5th February, 1516, butchers will be allowed to have, at their service, a pair of ‘Perros de Presa’, like the two trained dogs, property of Don Pedro de Lugo, to get rid of stray dogs in view of the damage done to livestock herds, as has been seen in areas of Adeje and Abona.

The Island Government forbids, from 3rd September, 1515, the ownership of dogs of any breed, with the exception of pig farmers, who may have one dog, on the condition that this not be a ‘Presa’. The slaying of stray dogs by Don Pedro de Lugo with his pair of Perros de Presa’, proved by presenting of the skins from heads of the animals, and fair payment to the privileged man are on record, as agreed with the Island Government of Tenerife, dated 9th April, 1518. The Island Government, on 4th December, 1525, makes it compulsory to register the ownership of ‘Perros de Presa’ and mongrels within six days. The Island Government reiterates, on 5th January, 1526, that, by agreement and in view of the damage done to livestock herds by large ‘Perros de Presa’, these dogs should be killed, and that only livestock owners may keep these dogs in their service, and with the exception of those dogs used by Don Pedro de Lugo, who had enjoyed the privilege for many years, of eliminating those dogs that went wild. In spite of the previous agreement, the Island Government of Tenerife, on 10th December, 1526, forbids cowhands to own ‘Perros de Presa’ and allows only four specimens of “Perros de Presa Grandes” (larg Presa dogs) to subdue cattle, and these controlled by four handlers, each of whom will hold his own dog on a rope.

Looking at the agreements reached by the Island Government of Fuerteventura during the 17th century, we came across some of great relevance:

On 25th August, 1617, the Island Government allows any person, without risk of punishment, to kill all ‘Perros de Presa’, owned by neighbors, and which are loose and unchained. A year later, on 19th February in the town of Betancuria, the Island Government recommends that the population not let ‘Perros de Presa’ loose, to avoid damage to livestock. According to the agreement reached on 21st October, 1624, each inhabitant can have a maximum of one hunting dog or ‘presa’. In view of the danger to livestock entailed, it was decided, on 16th August, 1630, that no inhabitant should have more than one hunting dog, which should be chained up; the rest will be put down; in case of failure to comply with the law, offenders will be sentenced to ten days in prison and fined the sum of six hundred “maravedíes” (a coin of the time). Possession of a ‘Perros de Presa’ should be reported to the authorities.

These regulations reached an extreme on 22nd March, 1632, when they imposed a license to be issued by the Governor for the ownership of a ‘Perro de Presa’, on pain of six “reales” ( a coin of the time).

In January, 1645, in the aforementioned town of Betancuria, which was, at that time, the seat of the Island Government of Fuerteventura, it was made compulsory to keep dogs, and in particular ‘Presas’ and hunting dogs, tied up.

The list of references to ‘Perros de Presa’ found in historical documents in the archipelago in the centuries following the conquest would be endless, but there is, at no time, in those cold, precise official documents, a description of the morphology of this dog; neither is there any distinction made between breeds, they are simply referred to as ‘Presas’.

We cannot, therefore, establish a hypothesis about the breed or variety referred to as these ‘Perros de Presa’, nor experiment nor speculate about whether it is one type or another. Neither can we check in drawings from the references listed, whether these dogs in the Canaries fitted the description of a particular kind of mastin, dogo or alano, but it seems evident that they were extremely useful animals for the inhabitants of islands, whose economy, essentially peasant and rural, was based not only on agriculture, but also on livestock of seasonal pasturage, and later, on cattle used for plowing, so important to cereal growers.

Under such circumstances, the dog’s living and sustenance would have been, without a doubt, an extremely hard and even cruel process of natural selection, which, in reference to ‘gripping’ type dogs, would be taken to the limit. 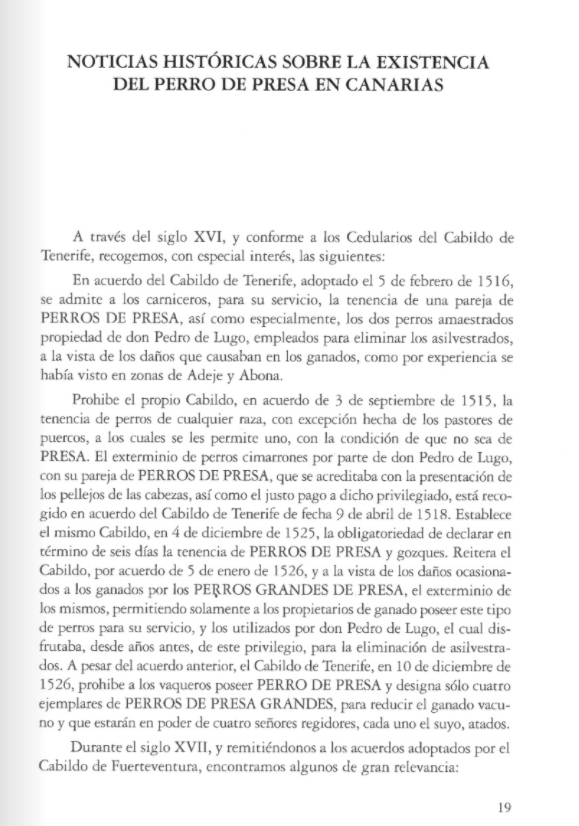 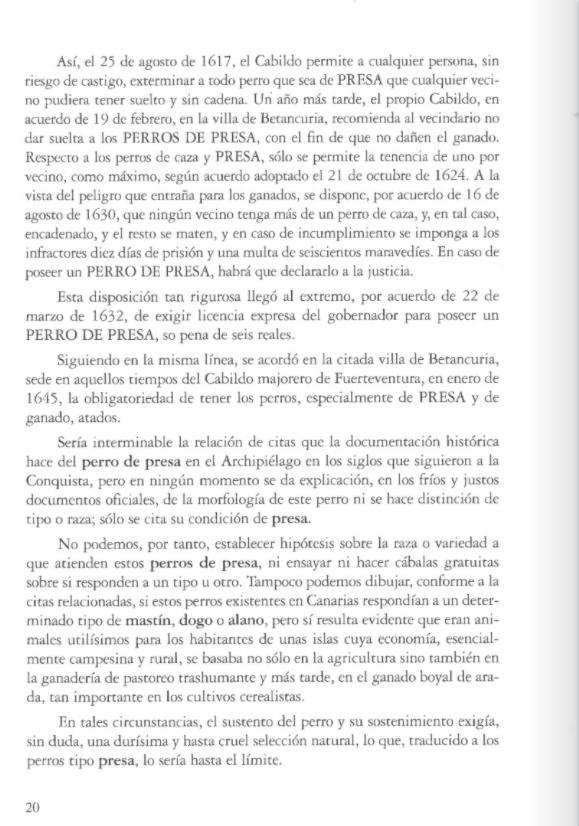