Every dog fancier is interested in his dogs’ genealogy. Pedigrees of some Spanish and Polish dogs can be found in pedigree database on my web site. But I think that this is not enough. I though that dogs from the past, those that are first dogs in breeding program of recovery of the breed are also very important and we should know some of them. The first and most important breeder was Manuel Curtó and his dogs are those that are in all pedigrees of modern presas. So here you have few of this dogs that played important role in the breed:

Also important dogs in those times was dogs that stayed in hands of other breeders. This  dogs were: Berry (son of Way whose parents were Puma and Tara, Way belonged to Luis Van Hichot and played important role on Gran Canaria). Way belonged to Jose Fernandez and was very popular dog in 70’s on Gran Canaria. Zorba (Moreno x Tirma), born in1983, was breed and belonged to Jose Sanchez Rivero he was important dog of Gran Canarian lines. Zorba is ancestor of famous black presa Tinto that lived in 70’s. Tintowas born in 1977. He played positive role in history of presa, he was born in Vecindario (Gran Canaria) and his owner and breeder was Demetrio Trujillo (photos in part about black presas) – Tinto was very famous as a fighter at the beginning of 80’s. In year 1974 bitch named  Bearde (born in 1972) was breed to male Manolo (born 1972) that belonged to don Silver Mes. Barde belonged to Jose Manuel Teixeria. One of the litter (all fawn) was Taoro that later was crossed with bitch that belonged to Juan Quevedo Martinon, and her name was Gara – from this breeding was born dog named  DRAGO, bought by don Castillo and later crossed with Mora de Irema Curtó – from this breeding was born Guanche. Another dog is Felo born in 1976, son of Choto and Diana. that belonged to J.Q. Martinón. He was imported to Tenerife from Gran Canaria and he played very imported role in Irma Curt and Drago lines. In 1980 was born fawn dog named Porkyhe was son of Mahan de Irema Curto and Turka. Porky belonged to Juan Cruz Rojas. In 1982 was borne striped León – his parents were Campeón de Irema Curtó and Laika. This dog breed by Silverio Mesa was father of many good presas. He belonged to Manuel Martin Bethencourt. In 1985 is born son of Mahan de Irema Curto and Nuga- Azano. Azano was the dog that was used as a prototip in constructing first standard of the breed. Very popular dog was born in 1990, Puntal whose owner was Manuel Bruno Aguiar. In 1993 was born Traquer. His parents were Campeón de Irema Curtó and Tirma. He was breed by Mario Montequi and belonged to Francisco de la Paz Ledesma. In 1985 was born Guama, doughter of Caporaland Gara, breeder Mario Montequi, owner Juan Jose Alvarez. In 1983 from breeding Mahan de Irema Curtó to Teguise de Irema Curtó was born  Chalia that belonged to Toamas Ramos Arvelo (breeder M.M.Bethencourt). In 1980 was born Tara – breeder and owner Juan Jimenez Espino. In 1974 was born Gara that belonged to Juan Quevedo Martinón – she was mother of many important dogs.

Looking at this dogs we can see that they are in all pedigrees, that they are also in all pedigrees of Champions of Spain and monografic winners. Today breeding programs continue León-Sultan-Patagón lines. All of this dogs came from Mahan – Teguise (de Irema Curtó) lines and Nusca (de Irema Curtó). But presa canario is something more than that and this was only examples.

From what Manuel Curtó said on his web site it can be so that Patagón wasn’t son of Teguise de Irema Curtó but Dogue de Bordeaux with was crossed with Mahan de Irema Curtó. 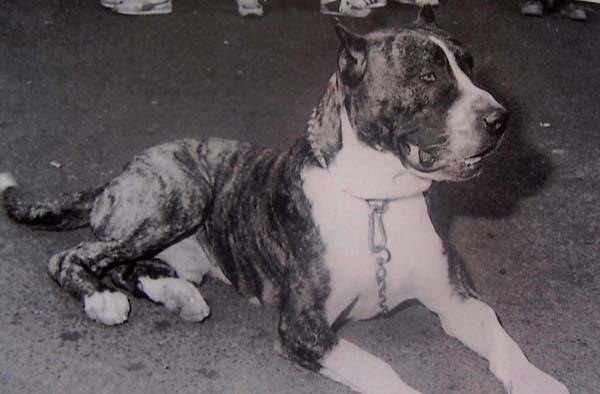