The Canarian Archipelago, made up of a chain of volcanic islands and about 500 km in length, lies between 27° – 29° latitude North and 13° – 18° longitude West, very near the north-western edge of Africa. The proximity of the almost uninhabited, desert continent and the differences in culture and economy have meant a certain isolation, which has been offset by full integration with the western world in Europe, through its relationship with Spain since the 15th century.

Once the slow, hard conquest of the archipelago was over, the dividing up and allotting of land started at the same time as colonists began arriving from mainland Spain and many other parts of Europe. The process of settling the islands had barely begun when the Canary Islands became an almost obligatory stopover for Spanish ships sailing to America from the ports of Cadiz and Seville. The inclusion of the archipelago in shipping routes and its being a colonial settlement would mark its future, as very soon it would draw pioneers from many parts.

This strategic position in the Atlantic, which was vital to Spanish ships en route to America, was also a priority for Dutch and, more especially, English corsairs.

Relations with England were established quite soon and, although there were less friendly times as a result of the almost constant state of war existing between Spain and England, in particular the numerous pirate attacks on island coasts, such as those carried out by Drake on La Palma in 1585, by Raleigh on Lanzarote and La Gomera in 1617, by Blake on Tenerife in 1657, and even the attack by Nelson himself on Santa Cruz de Tenerife in 1797, a number of English traders settled in the islands from early on, from where they exported local crops and imported all kinds of manufactured goods. In this trade there was particular control over wines produced in the islands, especially the malmsey, which was the highest in quality. English firms from Bristol, such as Hikman, Castelin and Lok, or Thomas Colin and Eduard Fallier, represented the old, and peaceable, presence of that nation in our islands.

The Canaries, as one of the archipelagos in the Macaronesia, could not escape the curiosity of travelers and explorers who landed on the islands in search of the secrets of the Neolithic culture which had existed in the archipelago until the 15th century.

The observation and study of the islands, the theories about their origins, which were linked to the myth of Atlantis at that time, their singular nature and geography all led to a series of tales, descriptions and travel memoirs, which, since the 18th century, have been published in Europe, although particularly in England, as the country with most bonds with the archipelago. There was a well established English colony in the archipelago, which, in spite of distance, maintained strong ties with England through trade.

They were not only active in trade, but also in agriculture. The British acquired large pieces of rural land and built their homes in urban groups, with architectural styles, which were really British, but adapted to their adopted country.

The British citizens based in the colony returned to their country regularly and kept their environment on the islands within the essentially British style and tradition. From their country, to which they could travel directly from the Canarian Archipelago, they brought their culture, their possessions, animals to guard their property, their pets, their customs and their traditions.

Looking back into the rich history of English cynology we find that in that country dogs were bred for all their uses; as guard dogs, hunting dogs, herding dogs and as pets, and that, from early times, great care was taken with the training of dogs to fight other dogs and other animals, such as bears, bulls, lions and badgers. This was a popular sport for many.

In the first centuries after the Spanish conquest of the islands, the English dog considered the archetypal fighter was called the Old English Bulldog, which was a medium-sized, compact animal with a powerful build and with all the requirements for relentless pursuit. This dog had inherited the best of the traditional Bandog and of the Spanish Perros de Presa, also known as the Bulldog Espanol, which was sometimes used to re-temper the blood of the English dogs.

This kind of dog, which was ideal as a guard dog, was part of the English environment in the Canaries. Later, moving on in time to the end of the 18th century and the beginning of the 19th century, another kind of fighting dog appeared in England as a result of crossing the Old English Bulldog and the Old English Terrier, and which was called the Bull and Terrier. The result of this cross was smaller in size, lighter, faster and hot-tempered, and was better suited to the sports of that country.

The Bull and Terrier was the basis of all the fighting breeds, known as pit dogs, such as the Pit Bull Terrier, Staffordshire Bull Terrier and the white Bull Terrier.

All of these dogs, which were medium or small in size, of strong constitution and easy to transport, were brought to the Canaries to fulfill the requirements of the English colony – essentially, to guard British homes, factories and land, but also to carry on the sporting traditions of hunting and dog fighting, introduced to the islands by the English.

The appearance of these emerging English breeds led to inevitable crossbreeding with Presa type dogs already existing on the islands, in view of the fact that the archipelago was isolated, under strict control and, at that time, scarcely inhabited.

At the same time as the Perros de Presa we have already spoken about, on the Canaries there had always been a dog used to herd goats in particular, and which was commonly bred on the island of Fuerteventura. Later, it spread to the other islands, where it was named, and is still known as “Majorero”, after the island of its origin. It had a brindle-striped coat, was rustic and of incorruptible character.

The crosses between Presa dogs and Majoreros produced a medium sized animal, which was rustic and hard-working, and which was known in the country as the Perro de la Tiera.

The progressive blending of Canarian and English dogs, already mentioned, laid the genetic foundations for the Perro de Presa that time formed through the 19th century until the beginning of the present century, from when we can confirm its existence through graphic documents. 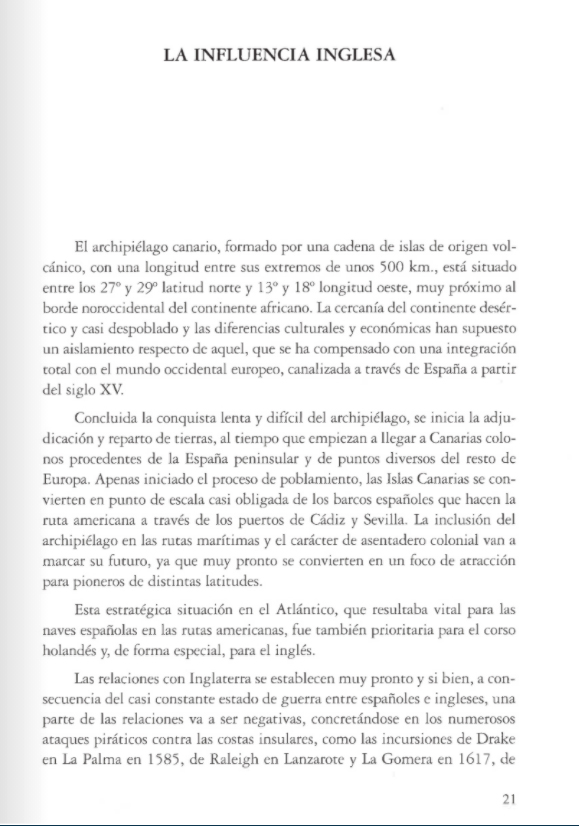 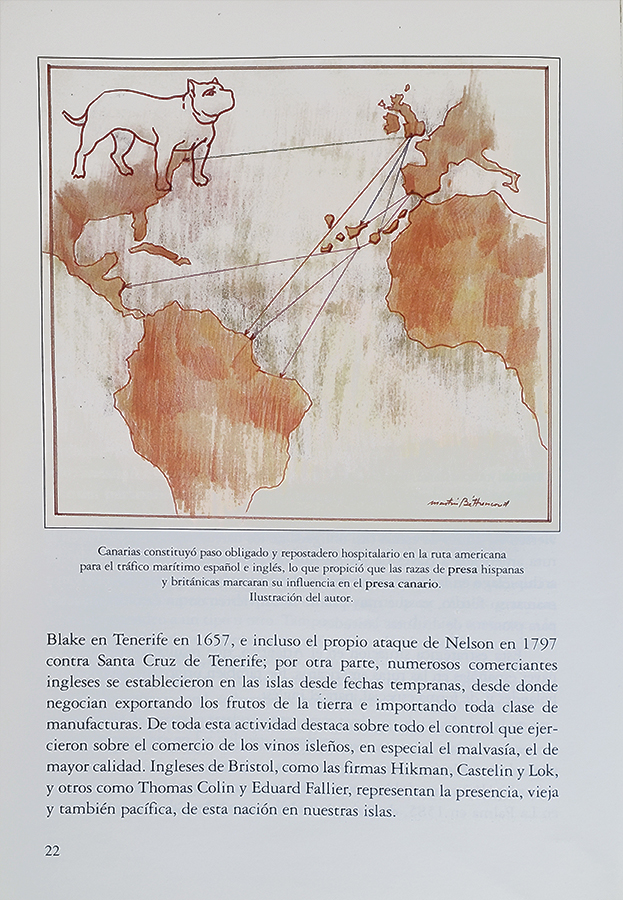 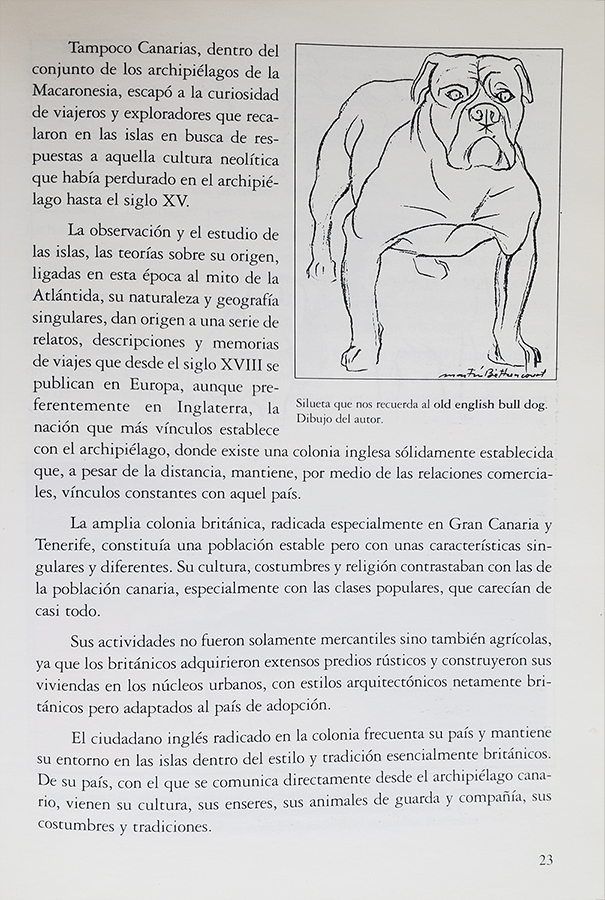 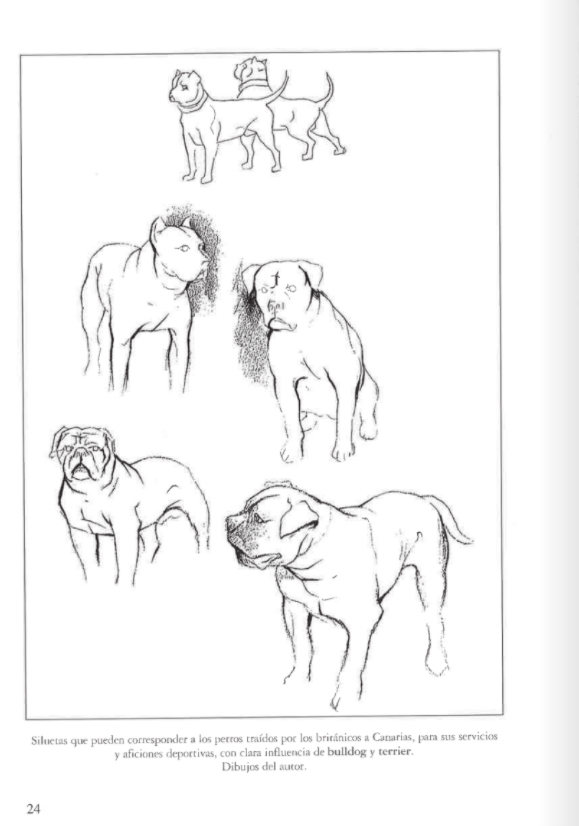 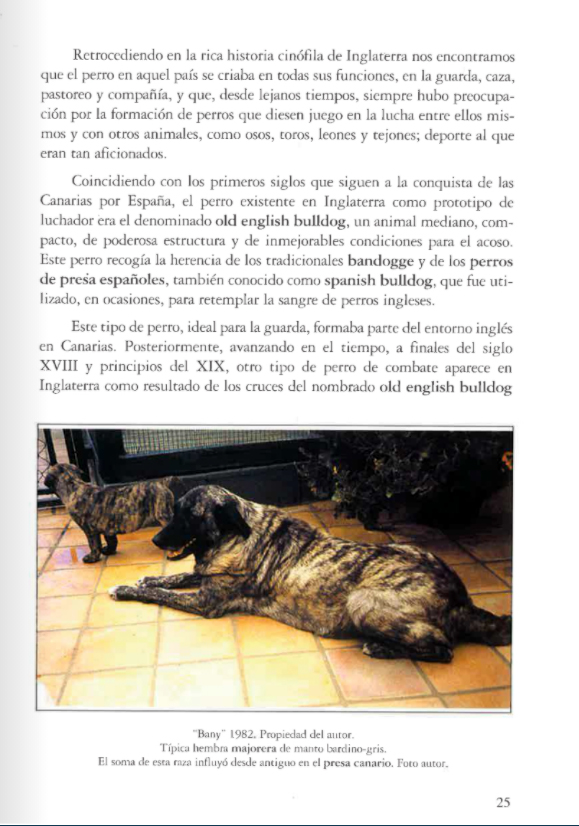 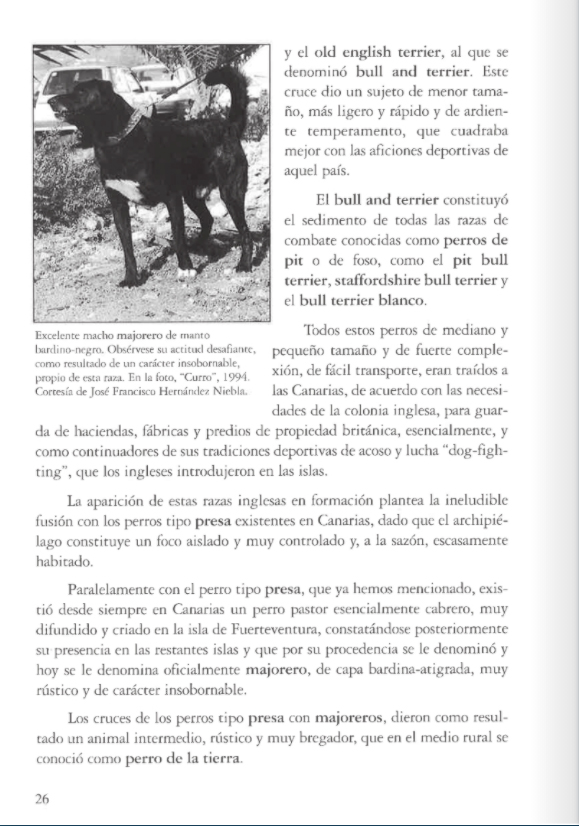 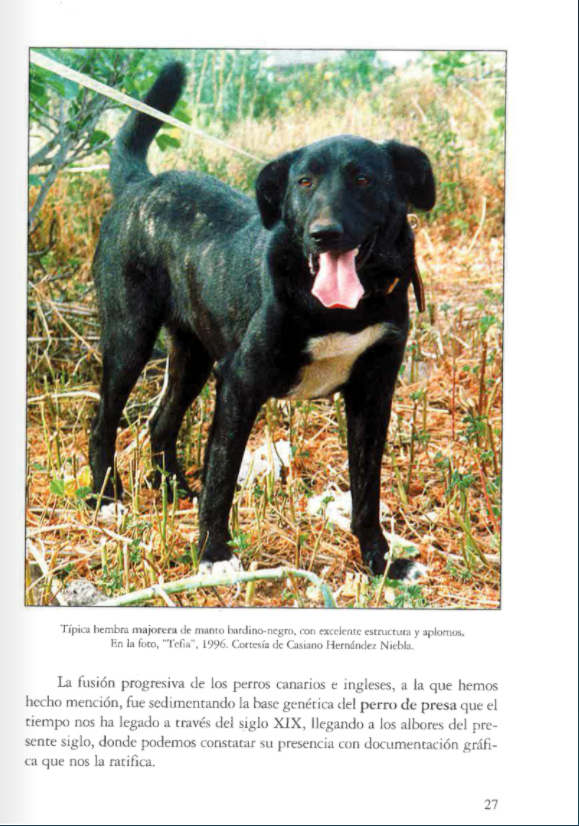 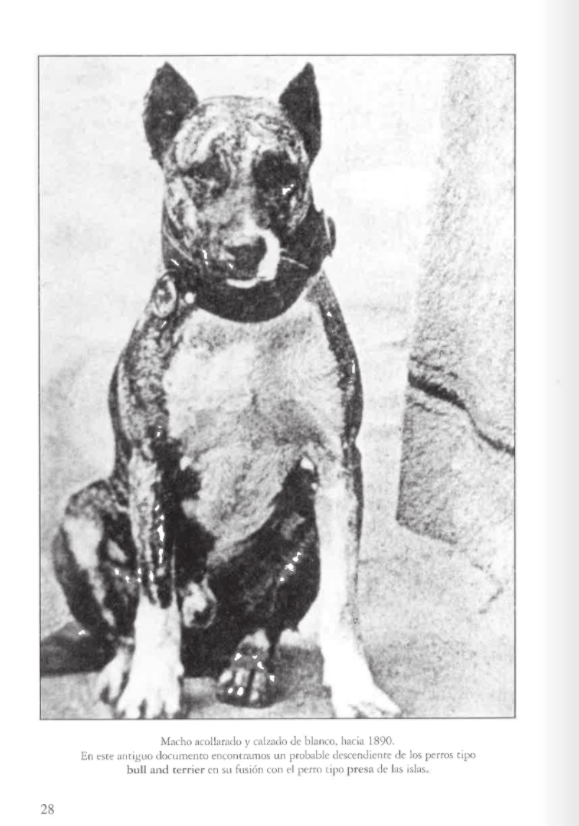 Xixi and Rino work and chill