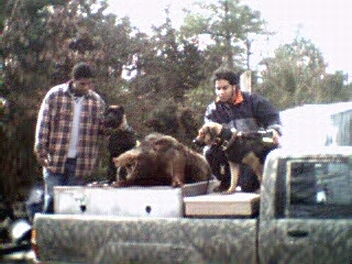 Tyrone Brown, owner of Digi Digi Kennel, is a corrections officer and NPPCC breeder from Thorfare, New Jersey. At the age of 30, he speaks with the authority of a dogman twice his age. When I finally managed to reach Tyrone, I learned I had called at a bad time. His stud dog, Hino de Irema Curtó, a black Presa from Tenerife, Canary Islands, had just succumbed to heat stroke. Nonetheless, he was happy to speak with me about his dogs, hog-catching, the Presa in America, and the UKCP project.

Tyrone breeds a line of dogs that are 50/50 Irema Curtó and Show Stoppers. He wastes no time in paying his respects to Sr. Curtó Gracia and Mr. Richard Kelly. “Everything in my yard is because of them.”

Digi Digi Renia (pronounced “diggy diggy rain-a”) has earned her Working Bulldog I, II, and III titles, and earned the WB I and II by the age of seven months. For those who don’t know, these titles are awarded for achievement in the sport of hog-catching, probably the most difficult and dangerous of the canine sports. Her brother, Digi Digi Roughhouse (Escabar), has earned his WB I and II. His four dogs between have them 10 working titles.

Renia and Escabar are out of Hino de Irema Curtó (Tigre x Dama) and SS Valeta, from the renowned Mufasa – Medusa line. Tyrone also owned SS Alligator (Rico) out of the same line. Rico, you may remember, won some notoriety by earning the PCCA “Best Working Dog” of 2000.

He has a deep love for the Mufasa – Medusa dogs. He says they are athletic like their father, and possess the temperament of their mother. Of Medusa, he says, “she was a hard dog. She would hit you, no problem.”

Tyrone says the IC/SS lines “blended lovely”. He prefers the smaller, sport dogs, with a good performance body, well tucked, and long legs. Tyrone feels a weight of 100-105 lbs. is perfect. That’s why he chose SS Valeta for his breeding program. At 95 lbs. she was just the right size for the type of dog he envisioned.

The qualities that Tyrone breeds for are:

“I breed for what Mr. Curtó wrote in his book – the true ‘island temperament’. A dog that’s laid back but reacts under threat.” Tyrone believes that everything the breed is today is mostly from Curtó.

The approach of Digi Digi Kennel is to breed for generations. “You must establish bloodlines. Some breeders don’t do this.” He points out that though it’s kept quiet, you can see examples of houndy and dane-ish appearing dogs when breeding isn’t approached with a view of the bloodlines. “Of course this happens,” he says, “because the dogs were originally bred for function, you can get all kinds of shapes and sizes.”

But he is very clear on this point: work and function must come first. “You must KNOW your dog’s temperament.” He has seen Presas at shows, beautifully conformed, but cowed ‘like a cat’ as they move through the crowd. “If a dog isn’t right, don’t use that dog. Even if you want to. You have to bite the bullet.”

When told about the UKCPresa project, Tyrone responded that he has always enjoyed the El Presa site, and regretted it’s gone away. “What we need is an international community. We need to join together, like a corporation.” But Tyrone feels strongly that the biggest problem we face is that “people want to breed everything.” He encourages Temperament Testing, and feels it should be written into the BYLAWS of any organization. “What about resistance to that?” I asked. “Some feel we would lose breeders.” “That’s OK,” he said. “We’re grown-ups and we can disagree. But I’d rather lose breeders than lose the dogs.”

“And now I want to tell you something. Dogs are dogs. Presas are bulldogs. That’s what they are, that’s what they act like. You don’t need some kind of special test just for Presas. You train them just like any other bulldog.” Tyrone feels that a good testing venue is the American Temperament Test Society (ATTS). It has wide availability and tests what needs to be tested. “But novices can be fooled,” he says. “You don’t have to train with a specialist. That’s totally wrong, and it gives the breeder and easy out.” Tyrone is very positive about the average buyer however. He feels that “the average person does right by their dogs.”

He also feels that the breeder needs to be careful in evaluating the puppies before they are placed. “This is a mastiff, and they mature slowly.” He doesn’t believe in placing dogs before three months of age, and thinks 15 weeks is a good average. “You gotta sit on the dogs”, he says.

Tyrone is a person who puts his money where his mouth is. “You need to get your dogs out there.” He’s very enthusiastic about hog-catching and says his Presas are making a reputation for themselves at the International CatchDog Association (ICA). In June of 2002, Digi Digi Renia will be competing for her professional title. This is an extreme level of achievement, and few dogs ever make it. “Catch work is everything these dogs are about. It takes speed, power, agility, and they have to be smart and tough. And there’s no better way to prove your dog. It gets cut and just hangs on.”

“People say their dogs are the best. Anyone who sees my dogs hunting, scaling an eight foot fence, changes their mind. My dogs prove it.”

How Majorero contributed to Presa?