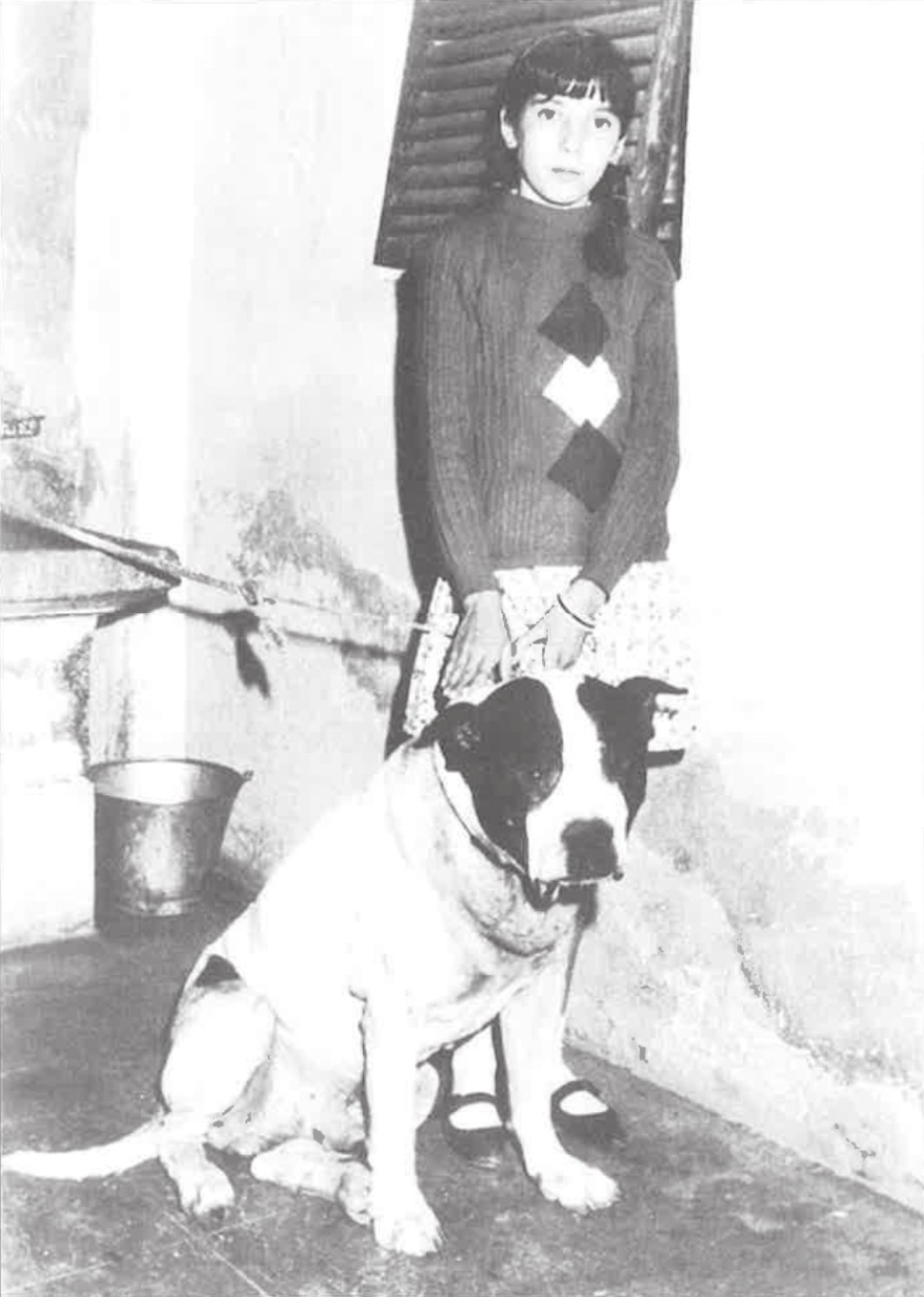 Originally published on 31st of July 2014

The modern concept of a breed contemplates the existence of genetic inheritance producing a homogeneous population, similar morphology, at least in the essential characteristics shown in the breed standard or description.This concept is little more than one hundred years old, and most existing canine breeds today have been set and standardized in the last fifty years.

The idea of creating a concept of breed came from very developed countries, such as England or Germany, and spread to the rest of the world, although it was adopted in Spain quite late on. The great majority of Spanish breeds have been standardized and recognized recently, and some have disappeared forever.

If this situation has affected mainland Spain, the effect has been even greater in the Canarian Archipelago.The ‘podenco’ (a kind of hunting hound) and the Presa Canario were recognized in the 1980s and the majorero ( dog indigenous to Fuerteventura) in the 1990s. But, despite the official recognition, the concept of breed is catching on very slowly in the islands.

If this is the case now, what would it have been like in the first half of the century, in the 1920s, 40s and 50s, with respect to the ‘gripping’ dog? Well, really there was no awareness of this at all.

To confirm this situation we carried out a survey among old breeders in Gran Canaria and Tenerife. In all, twenty-four breeders were interviewed, ten of whom were over seventy and fourteen over fifty.

Many of these people knew the ‘gripping’ dog from years before and they were asked about specimens from before 1970, which was around when the breed began its revival and people began to focus more on the bloodline of the dog.

When asked about the appearance of the Perro de Presa most of the people interviewed described it as a medium sized animal, with a wide forehead and bricklike head, well-balanced and spirited. However, there were differences of opinion about the height, especially amongst the younger breeders, who described a taller animal.

There was no doubt that there was little homogeneity in the breed and the breeders pointed out some notable differences.

Of course, most of these people, who had owned and bred ‘gripping’ dogs in their youths, preferred the dogs of yesteryear, practical dogs that worked well, to the dogs nowadays.

It is a well balanced animal, and is very spirited, which is positive in training.

The concept of breed didn’t exist and neither did anyone care. The most important thing was that the dog had what it needed to do the job, which was usually to guard land and houses and to herd livestock in the country.

After consulting qualified people, we reached the following conclusions:

At this stage, we can state, with very little margin of error, that the Perro de Presa has always existed in the Canaries, because it was necessary, and that it always constituted a heterogeneous, but real, ethnic group.

We cannot speak of a typical Presa Canario, as this did not exist at that time, because the whole concept of a set type was unknown. However, there was always a ‘Perros de Presa in the Canaries

The revival and awareness of the breed, as a modern concept, started in the 1970s and was defined by the laying down of the breed description, from whence it is called Presa Canario.

Despite all that has been said, we are completely in favor of there being a Perro de Presa in the Canaries. It is well known that an ethnic group is a most solid base for any breed, from a modern viewpoint. This is exactly what has happened with this dog.

This solid base, this starting point is what gives the Perro de Presa of the Canary Islands great personality; as well as that genetic amalgam, it has age and tradition. This tradition awards the breed the title of “ANCIENT BREED”, with all the honor that goes with it.

To achieve this is a priority, but it is slow work and hard. It is not enough to just breed, each one going his own way, out of touch with other breeders and concerned with what is best for himself. We have to show our dogs, put our litters up against others and produce champions that, in many cases, is a sign of leading animals and good breeders, that will establish the route to success in the rise of the breed. And we have to speak, yes, speak, not pontificate, and to establish, through dialogue, what the best way to do the job is. 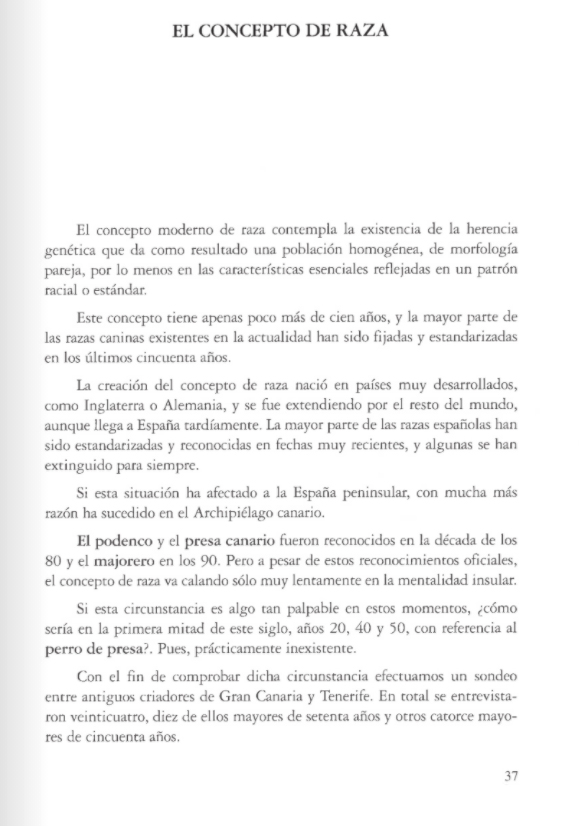 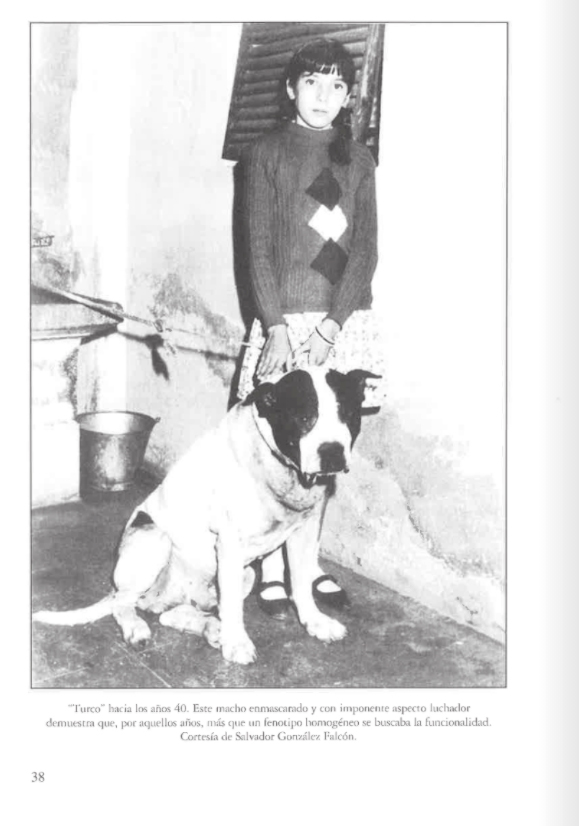 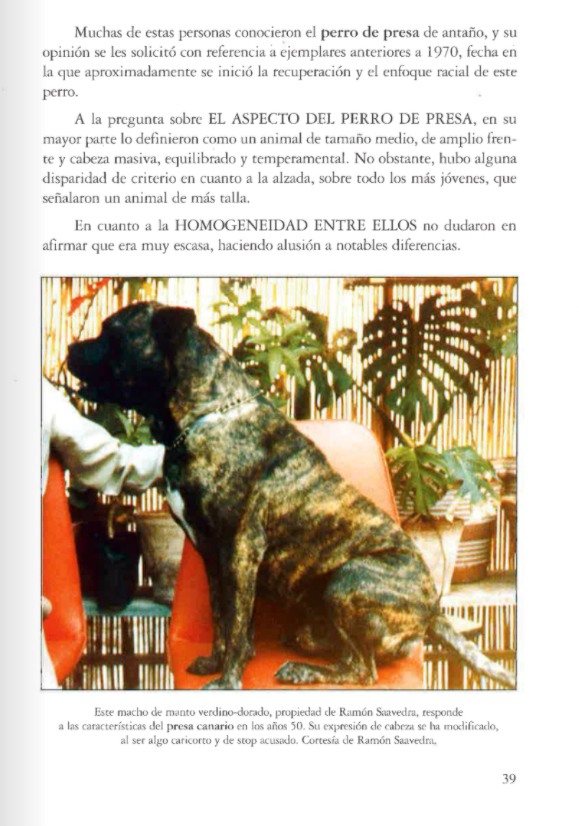 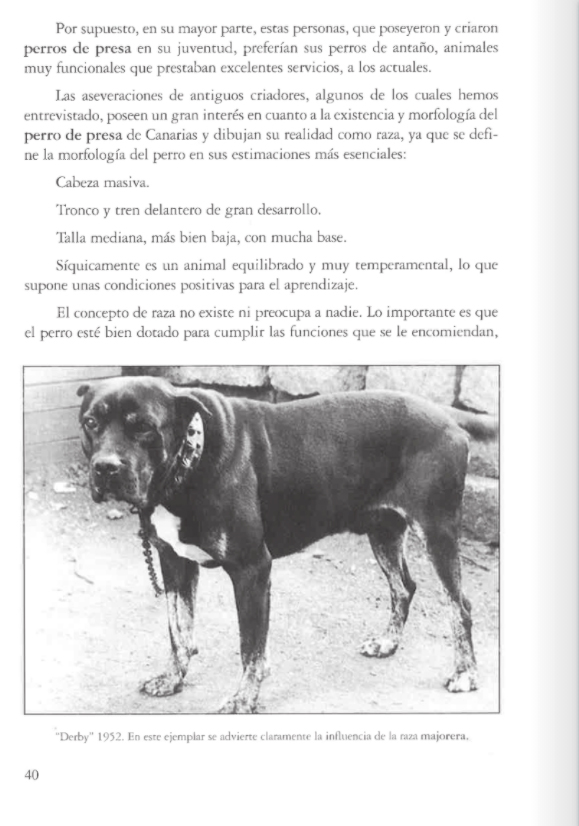 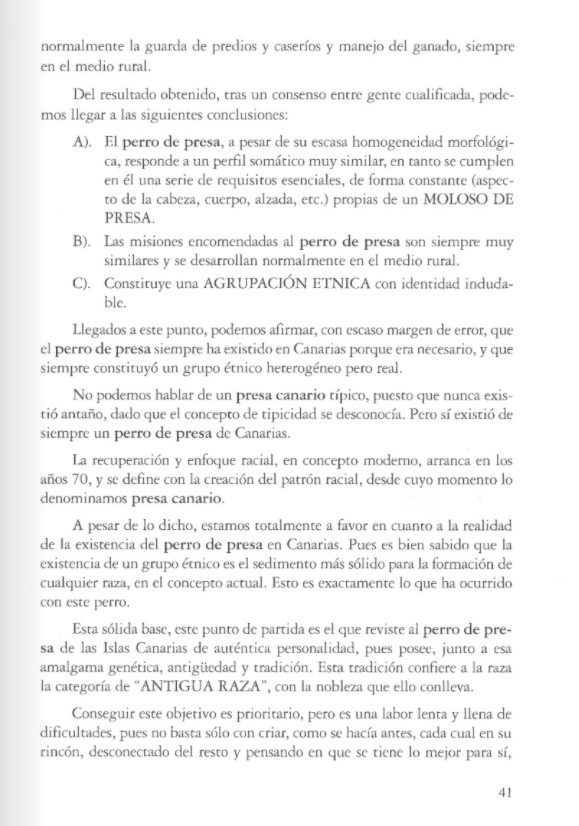 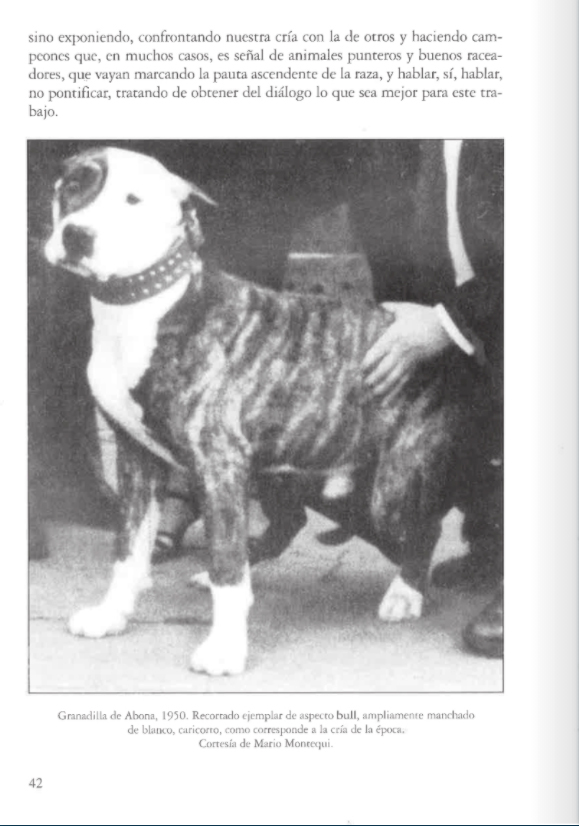 International Day of the Dog

Presas are smart. They also have good memory to people.