Skip to content
1-502-592-1262 text & call
Mr. José Rivas, owner of the Cantadiello estate, is the man who introduced various breeds  previously unknown, to  the Spanish region of Asturias. A breeder and trainer of surprising character, he was especially dedicated to the German Shepherd and to the Presa Canario. He produced many litters, of which  few descendants are left. Dogs of strong health,  impressive structure (without excess) and great mobility. Dogs that were good at guarding, (a rare thing nowadays due to the excess of confidence towards strangers of the majority of  specimens) and a great ability for fighting.
Within his bloodline he always looked for strong dogs but tried to minimize the impact on temperament and mobility. At the present time we can say that few Presas show a functionality comparable to that of this bloodline, as in order to impress with big heads and wide chests, breeders have largely neglected the reason-to-be of a Presa Canario, to protect his owners, properties and himself.

Why the name Cantadiello,and where does it come from?

Cantadiello is the name of my estate. In  past times there lived an old man who used to sing very often and so it began to be called “cantaviejo” (“cantaviello” in Asturian dialect).Finally was changed into Cantadiello.
When did you begin to breed, and for which reasons?
About 25 years ago, I met Mr. Asensio in Madrid, where I saw for the first time a Presa – who was of his property – and I was particularly amazed by him. If I do remeber well his name was Drago. Then I met “Rocky”, owned by a cattle trader from Asturias called Fernando Cuesta Juglar. I liked that dog very much and I gave a horse in exchange for him.
He brought him from Tenerife. Then I brought a bitch from Las Palmas – which was previously owned by a dog fighter, friend of Demetrio El Cabrero (ndr Demetrio Trujillo, the owner of the famous black coated Tinto) – and that was called Nona, and two more bitches nephews of Tinto, daughters of Mogàn owned by Demetrio El Cabrero. These last bitches were obtained thanks to the mediation of Fernando De Lorenzo.

Do you work your dogs,and if so what kind of work?

Yes I do, but nothing special, I just do obedience and attack with them, but not competitons. It is more like civil work.

How do you select your puppies, and what do you do when you see that the puppy is morphologically ok but he does not have temperament?

I always had puppies with temperament. As an anecdote I can tell you that sometimes I used to find dead puppies through the litters, and I did not know why that was, till I discovered that they used to have fights till the death. Sometimes I took one out by the tail and there followed two or three which were still hooked on like a bunch of grapes. Anyhow, if I had puppies without temperament I would not breed them.
How did you use to determine the breeding criterias?
I never followed a written standard. I searched for a big strong dog, whose size would not reduce his mobility and with a temperament in harmony with his structure, impressive.

What do you think about the separation of the breeds Presa Canario and Dogo Canario. What are their more notable differences?

I do not know the Dogo Canario.
Do you believe that Presa Canario breeders used to outcross? What is your opinion about it?
In the Canary Islands they always used to breed for the tasks of guards, catch and especially fight, without following a single standard. They used to make all the crosses which worked great for that tasks, period. Those were the dogs of those times. They used the Mastiff,  the Bulldog, the Staffordshire Bull Terrier and the Perro de Ganado Majorero. Later they used also the Pit Bull, the Bullmastiff,  the Neapolitan Mastiff and the Great Dane.
Crosses have always occured, even in the Canary Islands there has never been homogeneity.
Simply through various generations the temperament was lost. The Majorero was then used to give the Presa that bit of distrust that he needs.
Is the social status of the owner or of the breeder decisive as far as how Presas are bred and how they develop?
The only thing which influence that is the handling, the passion.
How it is possible to note when a dog had crosses with Great Dane, Pit Bull or other breeds?
You can say it because of their look.

What are the differencies between fights and pechadas?

I do not understand about the properly called “dog fights”.
What is the difference between a bloodline that was never fought and a bloodline which was selected with dogs tested in fights?
Mainly in their mobility, also in their physical and mental hardness.
Which are those bloodlines that you do consider as old?
The ones which do not look like the Bullmastiff.
A pup is “Presa Canario born” or he goes making himself through time? And by what does it depends?
Is a thing he should have from birth. It depends on the bloodlines.

What is the importance of the Bardino Majorero into his bloodlines?

All possible.
What should a Majorero have in order to be considered legitimate and to add something to the Presa?
Nerves, agility and a touch of insecurity.

What type of Presas is not of your liking, or is not functional on your opinion?

The majority that attend the show rings.

How do you select the puppies that you plan to keep for your program, do you make some specific tests to them?

Yes, I may make tests, but the most of it is done through observation.
How do you see the future of the breed. Do you believe there will always be a dispute between the two breeds or sooner or later will  proper honour be given to the Presa Canario, respecting his breeding parameters and those aspects which were traditionally searched for in a Presa?
I think there will be two bloodlines, a functional one and another one which is useless.
Do you believe that the Presas should attend to the show rings?
If they deserve it, yes.
Which are the continents in which it is most suitable that a Presa Canario may develop his working skills?
Every continent.
Are  breeders  nowadays using new blood to “refresh” some bloodlines of Presas?
Yes
What is the difference between the dog of the Islands and that of the Spanish peninsula?
There is a great variation in both places.
Do fighting dogs also guard or not?
Perfectly, the fact is that some dog fighters did not want that their dogs to go against people and those that use them in order to guard do not want them to fight, and for this it seems it is like you said, but the Presa Canario, as born, is able to do it all.

How is the Presa of Cantadiello?

It is a Presa Canario which, as born, has very good mobility and much temperament. 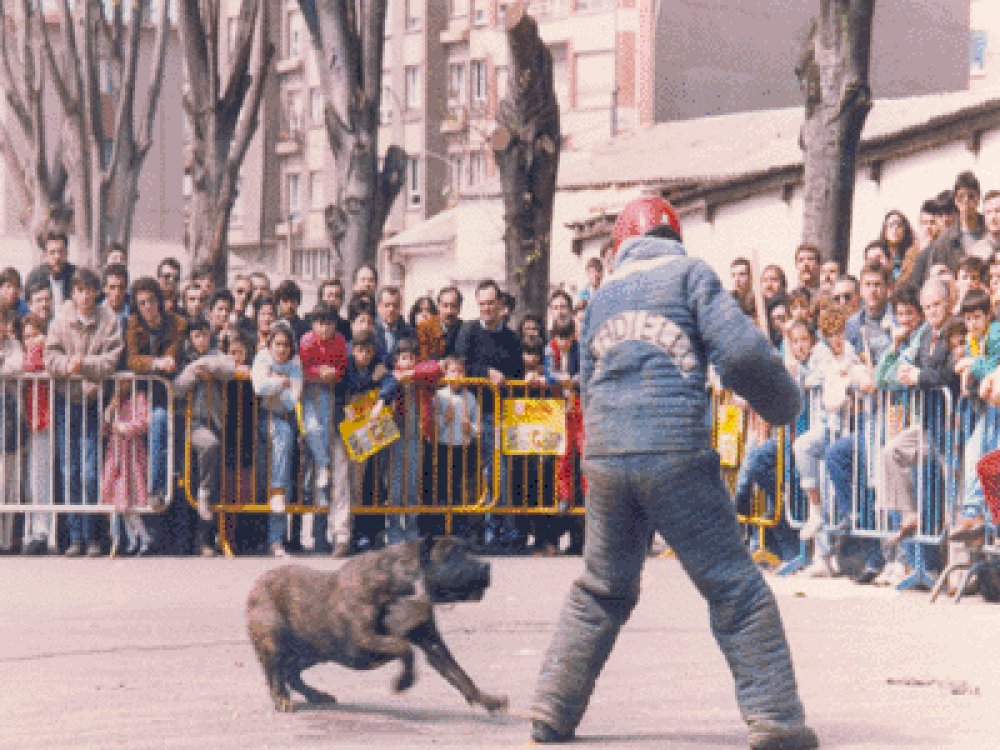 The Ins and Outs of Pedigree Analysis, Genetic Diversity, and Genetic Disease Control