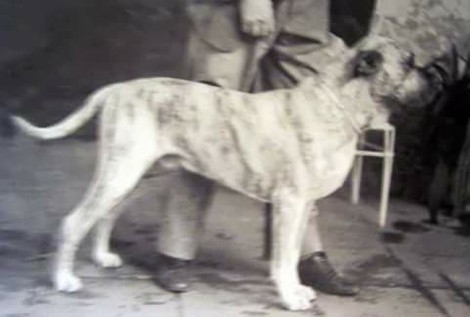 The official recognition of the breed generated a new tendency in the breeding of the Presa Canario. Until that time the numerous breeders reproduced continuing with just their  personal valuing of the temperament of the animal, good structure, good head, good front and good bone. The approach to a standard was not contemplated. The difference of the type on the two islands, Tenerife and Gran Canaria,  where the most important nuclei of the population was concentrated, is evident.

For the first time what was looked for was the phenotype of the animal, regarding the many ribs, the breed expression, using animals of medium type of good proportions, looking for the colors bardino or striped preferably and a cadence of movement. The character should be balanced. The island of Gran Canaria had true devotion to the mouths with bites in tong or in scissor. The phenotype mattered less to them and they principally looked for the strong character of the animal. The most important defects were coats where there was an excess of white, oval eyes with conjunctivas exposed and flat ribs. Excesses in the sizes also took place. It should not be forgotten that the functionality in the face of combat was the main mission of the breeders. In the standard of the breed are the parameters for the true breeder to follow.  The theories of which is “authentic” or “pure” are dismantled.  There is not but one road, and it is the selection and the intrinsic approach to the racial model.

It was a hard time and many breeders, perhaps due to excessive egocentricity, abandon actively breeding, it was the time of selecting to the maximum, not an easy course. The Monographic Exhibitions are one of the barometers which reflects what has been the evolution of the breed.

In fact the Presa Canario has become a true regional dog lover event, where the numbers of participants, assistants and [canine] examples alike, are faithful reflections of the projection of the breed. From the celebration of the first edition, on December 6, 1990, in at Ferial del Cabildo de Santa Cruz de Tenerife, where they registered 203 specimens, which only 23 consented to the competition, to the seventh and last edition celebrated October 12 and 13 of the past year in the Parque Cultural Viera y Clavijo, where  103 examples appeared for the competition and 63 examples for the initial registrations of the breed, of which only obtained the same average dozen of examples, they separate just six temporary years, but an abyss for the selection and improvement of the breed.  Partially, in each one of the editions the number of examples for the competition  increases and decreasing are those that seek the registration of breed. The rings of pups and youth class are numerous, and those of adult classes in males and females are more and more homogeneous. In the present idea of the Club, since the population is sufficient, reducing  of the registrations of breed, is had that in the numbering cases that are practiced will be solved with the rigor that now demanding to stimulate breeders to inscribe litters and studs in the LOE. (Book of Spanish Origins)

Marsha’s flight across the world