10 years of Presa Canario in Poland

While doing some corrections on my site I’ve found some interesting facts. In this year – 2007 – we have some anniverasries. It’s now 30 years from birth of few special dogs. It’s 20 years from this shows on with were made selection of best units, it’s 10 years now that we have Presa Canario in Poland… but let’s start from beginning…

25 of august 1617 (Villa de Betancusria – Fuerteventura) – so 390 years from now Cabildo (Goverment) of Canary Islands let every person without being punished to kill every Perro de Presa belonging to their neighbors is they are loose and not tied.

270 years ago – 13 march 1717 we can find last note from historical archives of Canary Islands in with we can read that all dogs should be killed if they are in places in with there are many people. Also owning a dog is forbidden to every people that are not farmers or don’t own cattle 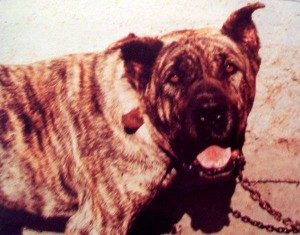 Photograped dog belonged to Francisco Leon Lorenzo. Photo was taken in Bańadero (Arucas). Falcon brothers were famous among other fans of presa. 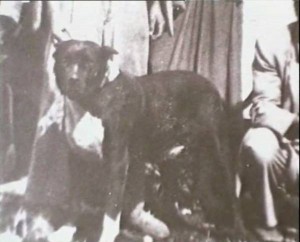 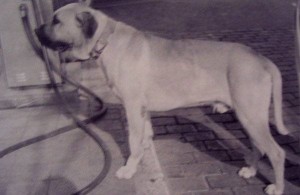 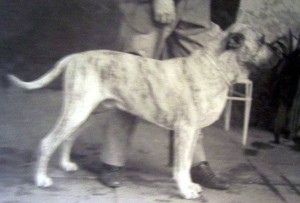 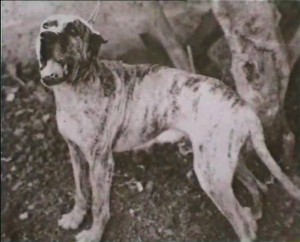 1977 is also year of birth of famous dog belonging and breed by Demetrio Trujillo – Tinto. Tinto was born in Vecindario (Gran Canaria). Today after 30 years from his birth we can find him in some pedigrees. 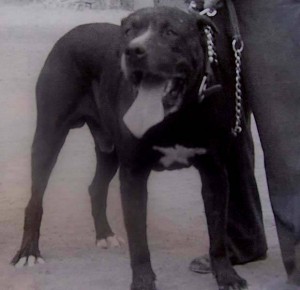 20 years ago – in march 1987 – pair of brindle Perros de Presa Canarios were for the first time in the history shown on International Dog Show “La Expo Otono ‘87”. Showing this dogs was one of the main steps to official recognize of the breed by RSC. This dogs were Faycan and Marquesa. Marquesa was breed by Jose Delgado and belonged to Emilio Estevez Molina and came from Gran Canaria. She was born in 1975. Faycan came from Tenerife and was son of Patagón and Nayra. 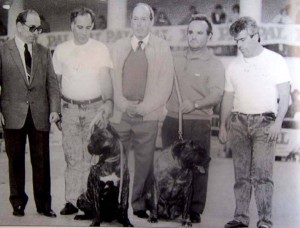 Also 20 years ago in june 1987 2’nd of two Regional Expositions of Perro de Presa Canario took place. On this two shows (this one on Tenerife, the other on on Gran Canaria) were shown 234 units of this breed from with 50 were chosen from Tenerife and about the same number from Gran Canaria. The show were held under supervision of Comision de Rasaz Espanolas).

20 years passed from day of birth of famous dog named Puntal who was breed and belonged to Manuel Bruno Aguiar. 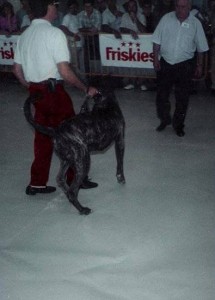 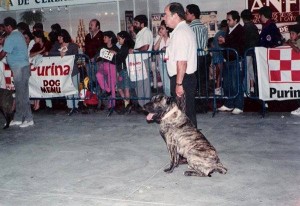 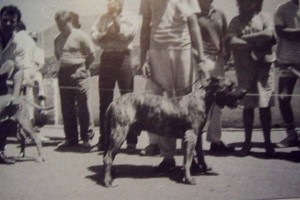 Also 20 years have passed from birth of Roby – son of Piti and Mora. Roby belonged to Cristobal Surez Rodriguez. 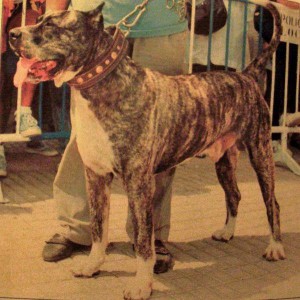 In 1987 (so 20 years from now) were born a litter from Azano and Nira. Among all puppies were also dogs such as Duda and Taoro. This litter came from Manuel Martin Betancourt. 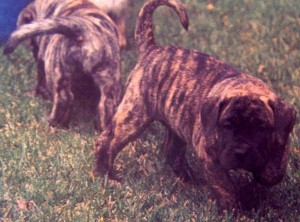 10 years ago – on 4th and 5th of October 1997 VII Monografica del Perro de Presa Canario took place. Winner of show was Mencey – son of Verdugo who was son of Aaron that was shown on this Monographic in veterans class. CAC in open class for the first time in history of this show was gave to dog from mainland from Asturia – this dog was Ralph. The best bith was Rina – sister of Mencey. CAC was given to Tacher – daughter of Turco and Tana.

click on this link to see some videos from this show

Also 10 years ago for the first time Champion of Spain title was granted to dog from mainland. This dog was born in 11.03.1992 and his name was Argual. He belonged to Salvador Serrano Anton (Alacant Bull).

His Champion title in 1997 received also Verdugo – son of Aaron and Talia. He belonged to Jose A. Figueroa Bacallado. Verdugo was born on 04.08.1993.

Year 1997 was also very significant when we see what dogs were born there. 10 years ago thee biggest number of dogs that later achieved Champion of Spain and World Winner titles were born.

25.01.1997 is also date of birth of another future Champion. Her name was Taifa. She was sister to Bruco and belonged to Fernando de La Paz Candelaria.

12.06.1997 was born a dog named Marlon Brando del Latet – Champion of Spain from 2005. He belonged to Abanicos del Jarama. His parents were Mancey and Ch. Carlota.

17.08.1997 was born a dog named Bronce de La Jacha out of Capitan and Tirma de La Jacha. He belonged Jacinto Martin Abrante. He is Champion of Spain from 2003.

17.08.1997 is the year of birth World Winner, Winner of IX Monografica and Champion of Spain. This dog was Tor that belonged to Antonio Gallardo.

24.08.1997 is the year of birth of Katu de Mayantigot – daughter of Ch. Vardugo and Ch. Uga. She belonged tochoro Ultracan. Her Champion title she received in 1999.

17.11.1997 another World Winner, IX Monografica Winner and Champion of Spain was born. She was Palma de Alacant Bull out of Ch. Tamaran and Ch. Carino. She was breed and belonged to Salvador Serrano Anton.

Now in 2007 we have 10th anniversary of importing first presas to Poland.

First presas came to Poland from Slovakia and were imported by Artur Tomaszczyk. A year later in the kennel “Przystań Abelarda” first litter was born. The breeder was Krzysztof Mrozowski. Parents of thes liter were Yeyo de Maxorata and Bety Hamigo. Among this puppies was female named Hera Przystań Abelarda. She have had few litter one of them with Kunta Kinte de Alacant Bull. Out of this litter was Drupia z Borów that was later crossed to Woo Doo Show Xanti Land and gave birth to Diva Tajemnica Mistrza (owner and breeder Izabela Pelińska). Diva breed to Ernest Koziołkowa Dolina gave birth to last years Eurtope Winner – Tahora Tajemnica Mistrza (owner Jolanta Zawadzka – Guanchos).

In the 1997 also first presas from Spain came to Poland. For the first dogs went to Sapin Waldemar Jankowski (Validus) and Agata Olejnik (Xanti Land). The took to Poland few puppies from Casa del Presa.

First dogs imported to Poland and born in 1997:

Born on 18.01.1997 Atila de Casa del Presa – son of Guanche de Nivaria Sur and Izana de Nivaria Sur. He was imported to Poland as an adult by Agata Olejnik and than sold to Lorenzo Giordano (Urocze Miejsce)

26.03.1997 is the year of birth of Puntal de Vega Lagunera – son of Ch. Tamaran and Bamba. He came to Poland from kennel Barnacan Bull to kennel Xanti Land in 1999 as adult. He received Champion of Poland title.

29.03.1997 was born Yaisa de casa del Presa – daughter of Ch. Barón II and Arona. She came to Poland as a 7 week old puppy to kennel Xanti Land. Yaisa is Champion of Poland and Club Winner. She is mother, grandmother and grand-grandmother of many Champions, Europe Winners…

In April 1997 two among other Tuna and Irbi de Casa del Presa were born.  Their parents were Tafur and Azoca de Canchas Ibakken. Yhe came to Poland as a few week old puppies. Tuna stayed with Waldemar Jankowski (Validus) and Irbi went to Wojciech Rosa (Dolina Rosy). Both females were Champions of Poland.

In 1997 also Samzara de Taguluche was born. She was daughter of Canelo and Bora.She belonged to Waldemar Jankowski (Validus).

12.04.1997 Kunta Kinde de Alacant Bull was born. He was son of Ch. Arual and Tinerfa. She came to Poland to Xanti Land kennel belonging to Agata Olejnik. He was champion of Poland.

03.06.1997 in kennel Barnacan Bull were bone Turca i Negra out of Tafur and Linda. Both future Champions of Poland. The belonged to Barbara Pałka (Mercator kennel)

07.10.1997 was born Doroamas de Adjemeto son of Dique de Canchas Mahan and Ch. Kima. He was Champion of Poland and Club Winner. He belonged to Agata Olejnik (Xanti Land)

From dogs that were imported from Slovakia 10th birthday would have:

Presa Canario is not a uniform breed

5 different challenge – easy when you have a total dog