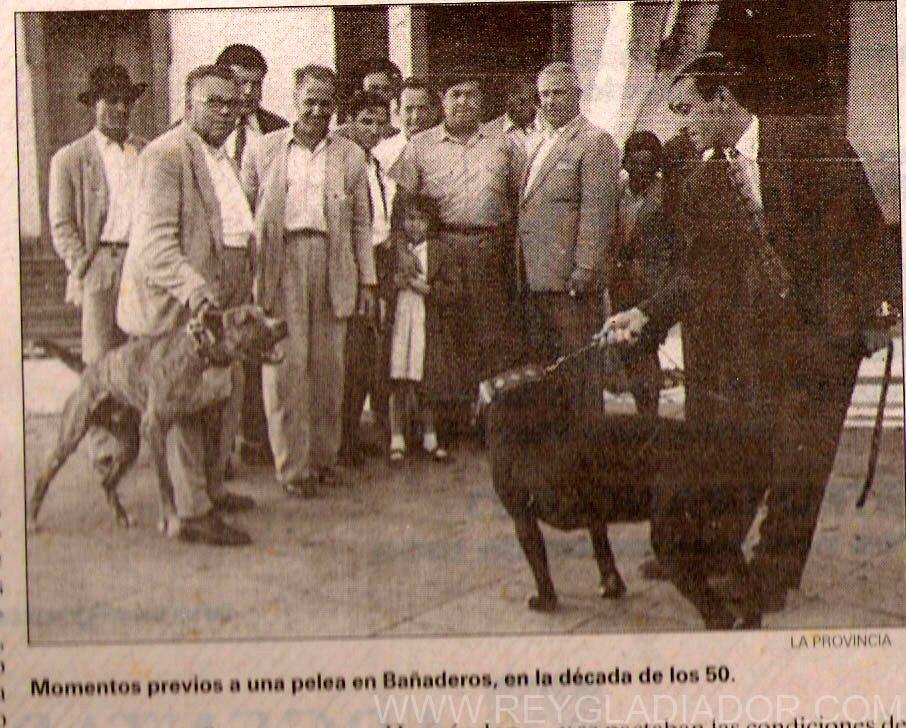 The existence ot the Presa Canario Dog XVI century, normally merchants and agents, traffickers in wines, and fruits of the islands, bring us for the first time, the ideal configuration of the Presa dog of the Canaries.

Bull-baiting and bear-baiting in England was a frequent and regulated sport in that country, for which they used bulldogs (ban- dog) and mastiffs (tie-dogs) that united their qualities of excellent fighters trained for guard dogs.

The British character and its sports traditions pertaining to the dog as a fighter, arrived at the islands. For dog fighting they used their typical gladiator dogs, bulldogs and bull terriers that they brought from their country, attempting inevitably crossbreeding with the existing Presa dog in the Archipielago. This English affection for fighting dogs is identified completely with the island character of combative disposition, an aptitude we observe equally in the Balearic Islands with their Ca de Bou or Presa Mallorquin dog or in Japan with its Tosa or national fight dog.

In the said process of racial fusion is presented the veteran Majorero dog of small bark and of great courage. The rustic and crossed hair of the sheepdog of Fuerteventura, the gray green tone being very dominant, appeared each time with more frequency in the Presa dog, and the synonym “Verdino” is generalized for both breeds.

One attempted in the populations of the Presa of the islands to have determined morphological modifications. Not only did one think about a Presa dog that developed a correct labor like a guard dog, or as a cow herd dog, but that it also ought to possess a good aptitude for fighting.

The English influence lasted a long time in the Canary Islands by reason of commerce with that country. Time settled the existence of the Presa Canario, which is presented to us in the present century as a fighting dog, with a large population in Tenerife and Grand Canary and very fit as a guard dog, an unquestionable aptitude of its breed. During the first third of this century, the practice of fights is a frequent event in the numerous sites on the islands, from whose period has come an ample oral tradition on the part of old fans who lived them and participated actively in them. Halls were established where the best specimen are gathered and selected for their best condition for fighting and not for their breed characteristics. There are specimen that test the beginners and give the size of their courage, virtue, and defects.

Until 1950, in spite of the prohibition of fights for more than ten years, there was a high index of quality and population from the islands developing around many popular persons, capable in the management and raising of the Presa Canario, an unending statement of its deeds and a slang where the words boast the ferocity and the nobility of the protagonists.

Dog time for mind and body