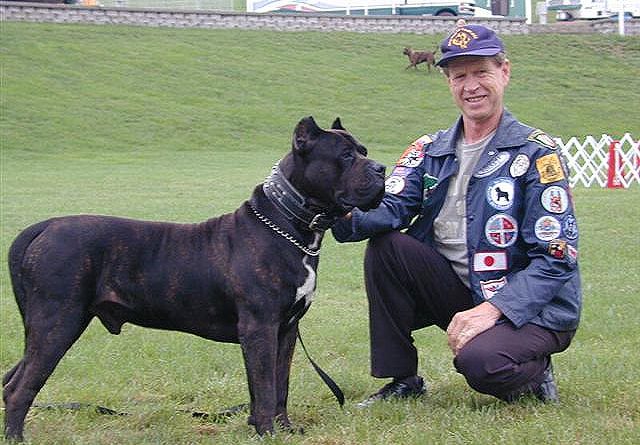 Our research shows numerous books written by historians concerning the development of the known Perro de Presa Canario (the “Canary Dog of Prey”). Documentation of the original, holding dogs date back to the XV and XVI centuries. Following the conquest of the Canary Islands it is theorized dogs of great size may have existed or were brought there by the Spanish Conquistadors or possibly both. What is known was the function for which these dogs were developed; guarding farms, struggling with cattle and the extermination of wild or stray dogs.

There are several theories regarding the genetic contributions to the creation of the Presa Canario. It is almost certain that the cattle dog, the Iberian Presa (Perro de Ganado Majorero) provided a start to the founding of the Canary Presa. The Ganado was a mastiff type of average size, rustic, intelligent with an intuitive instinct, a fearless guardian. Several other Hispanic breeds contributed to the Presa formation, especially the Presa Espaņol in its large varieties and the bulldog varieties (Alano), known for its clutching instincts. In time the island dogs developed into a completely differentiated breed due to the influence of the Spanish breeds. Around the XVIII century, the English colonists, traders and merchants brought their Bandogges and Tiedogs – predecessors of the Bulldogs and Mastiffs – to the Canary Islands. Shortly thereafter, the English introduced their gladiator breeds (Bulldogs and Bull/Terriers) and began crossbreeding with the then existent “Perro de Presa” of the Canary Archipelago. To what degree did each of these introduced breeds contribute genetically to the overall development of the Presa Canario remains unanswerable.

The final ingredient that completes the foundation of the Presa Canario was the genetic infusion of the Bardino Majorero, a pre-Hispanic sheepdog originating on the island of Fuerteventura. This dog was introduced for its intelligence, physical resistance, offering of excellent guardian instincts with little bark, extraordinary set of teeth and incorruptible courage. The combination of known holding dogs, holding dogs of the continent and the Bardino Majorero, started a new grouping dogs. New to the traditional functions of guarding and catching livestock was added a new function, to the delight of most island breeders: THE FIGHT!

In the 1940’s the prohibition of dog fighting was ordered throughout the islands, although clandestine fights were known to continue during the next decade. It was during this period the Presa Canario numbers truly faltered. The sovereignty of the island Presa worsened further with the introduction of the German Shepherd, the Doberman Pinscher, and the Great Dane. The island dog fancier’s interest now focused on these new breeds, almost causing the demise of the Presa Canario breed. During this darkened period the Presa was relegated in small numbers to farmers and herdsmen as their primary guard dog.

Reconstruction of the nearly extinct Presa Canario began in earnest back in the early 1970’s. Reputable breeders bred strong Presas that were rustic, massive, vigorous, and functional, who had acute watchdog instincts, a strong temperament, calm yet confident and were extremely territorial with unlimited courage. This dog when defending what he considers his would withstand the harshest of punishments without surrendering his position.

Full recovery of the Prea Canario heritage started in the year 1982, when a group of breeders from the island of Tenerife formed an association with the goal to propagate the resurgence of the Presa Canario as started in the previous decades. The Club Espaņol de Presa Canario (CEPRC) was formed incorporating breeders from Gran Canaria, Lanzarote, Fuerteventura and La Palma. In January 1983, the club was recognized by the Real Canine Society Central of Spain (RCFRCE). This club’s efforts and successes were duly instrumental in bringing forth the many new “Champions of Breed” as judged at the ongoing annual Monographic events, held in the islands and mainland. And now, a renewed interest in the breed has extended into the European continent and the Americas.

Reportedly, during the late 1980’s a handful of Presa Canario dogs were imported into the United States either by brokers or interested breeders. Their intended mission was to introduce this wonderful gladiator to the American dog aficionado, while adhering to the known breed standard of the time. It soon became evident with the formation of several breed clubs within the United States that the Presa’s popularity was on the rise. Dog fanciers were anxious to own and show this rare breed dogs. In 1990, the National Perro de Presa Canario Club (NPPCC) was formed in the United States providing a registry to all bona-fide Presa Canario dogs. As of January 1997, all certified Presa Canario dogs could be recorded with the American Kennel Club (AKC) under their Foundation Stock Service (FSS). Soon thereafter, other American Presa Canario clubs were founded. Some were quick to affiliate themselves with the new Canary Island Dogo Club, its officers and breeder members. It appears the intention of this new aligned grouping was to gain FCI breed recognition, this of course required a breed name change from “Presa Canario” to “Dogo Canario”. Apart from this non-historic new identity came a reconstruction of a shorter version of the historical Presa Canario. This new dog appears to be of a type more befitting the show ring than that of the rustic guardian known as the Perro de Presa Canario.

Today, reputable American Presa Canario breeders are moving forward in their mission to continue breeding healthy, functional dogs with fundamentally correct morphology, physically balanced, of good character, with strong temperament, along with the inherited coat colors of black, brindles of colors from light to dark and fawn, all with traditional white markings. 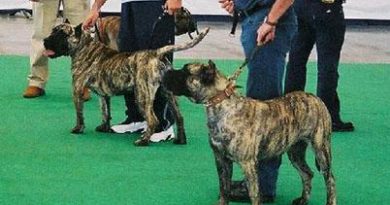 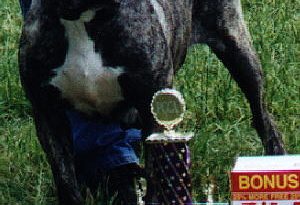 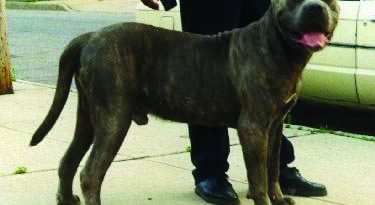